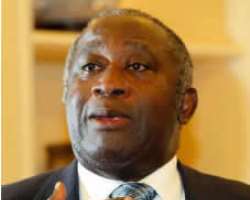 Laurent Gbagbo
All around Africa this year the challenge of democratic choice will take on extraordinary dimensions. Already the signs are prescient that with elections scheduled in Nigeria and Liberia the key issues of West African cooperation will be tested as the conduct and results of these important contests are contemplated by participants as well as by observers.

The situation in Cote d'Ivoire has revealed the extent to which such contests can deteriorate into a betrayal of choice rather than a resolution of public decision-making. At this time of writing the refusal of both Alhassan Ouattara and Laurent Gbagbo to consider any compromise in the Ivoirienne face-off has unveiled the total dysfunction that elections can generate in post colonial societies in Africa. While the general interpretation of events following the Ivoirienne elections tends to portray Laurent Gbagbo as the villain the empirical circumstances tend to show that the situation is much more complex than it seems.

Consider the fact that Gbagbo's faction appears to control the major forces of the national army and police. Consider also that his group's control of the nation's commercial capital and its largest city Abidjan seems unassailable and it begins to seem unlikely that his conceding victory to this rival will end conflict in the nation. In fact Cote d'Ivoire appears to be poised to descend into another spiral of ethnic and social conflict that might very well be even more brutal that that which the just concluded elections was meant to put an end to.

In Africa democracy should be regarded as a system for the recognition of a balance of interests rather than simply one that recognises the numerical superiority of votes. Here in Nigeria this is gradually emerging as a key factor of the rationale that motivates not only the elective process but also the selective process that provides candidates with their legitimacy. As a consequence however the process has unearthed old issues of division in the society.

The intervention of the African Union (AU) in seeking to find a solution in Cote d'Ivoire has helped to remind us that the difficulty of resolving national problems through the achievement of a simple majority in elections is not confined to any one nation or region in Africa. Kenya's Prime Minister Raila Odinga who has been chosen to head the African Union delegation to Cote d'Ivoire can attest to this. At the same time the situations that exist in nations like Guinea and Niger right now are fraught with challenges from substantial groups of citizens whose interests are based on their belief that they cannot expect fair and equitable treatment under a government that may have been elected by a majority but which they are convinced is dedicated to serving interests that are inimical to their own historical role in the national polity.

This is an issue that cannot be simply wished away in most African nations and in Cote d'Ivoire it has become an important element of national stability For this reason it is becoming increasingly clear that in many African nations the democratic process needs to be organised in such a way that its outcome should lead to a coalition of forces.

The assumption of outright superiority of control based on a perceived numerical majority in many cases serves only to aggravate existing historical divisions rather than to harmonise ideological differences.

This is what has occurred in Cote d'Ivoire and the solution will not be easily resolved by the simple acceptance of the victory of the candidate who can claim a numerical majority. If the obvious loyalty of certain institutions and ethnic groupings to President Gbagbo are ignored or rendered less relevant than they consider themselves to be to the process of stabilising the polity then irrevocable instability will follow. In other words the doubts and fears that Gbagbo's supporters have used to justify their refusal to accept the electoral result must be considered and accommodated in any settlement.

The settlement of Kenya's post-election crisis that has left Raila Odinga in the position to mediate in another African democratic crisis was replete with decisions that recognised the need for compromise. It may very well be that this is why the authorities of the AU felt that he would be an appropriate mediator since he can operate from the position of practical experience rather than merely of theory. However as we survey the continent's future as a democratic entity the diversity of issues and circumstances that confront us is cause for anxiety.

The approach of the referendum on Sudan's unity (for that is what it is) which is due this weekend is certainly one of the most important challenges facing the continent since the incomplete and uncertain resolution of Congolese civil unrest. There is hardly any doubt that the majority of Southern Sudanese aborigines will vote for separation. It remains to be seen whether the ascendant authority and ancient hegemony of Sudanese Arabs will be used to frustrate this impulse. If this happens the viciousness of the civil war that will erupt again could surpass anything yet seen in Africa.

It will take more than prayer to avoid this and the AU must be prepared to confront the consequence of the Sudanese exercise with fresh and innovative thinking if it is to build up a support base for the national entities that arise out of the process. Should it split in two new forces of division are bound to emerge both within the new nation formed out of the Southern Sudanese provinces and in the remnant of the rest of the nation. It is almost certain as well that the Darfur region will become the target of renewed separatist impulses.

This will not be easy to contain with a simple introduction of democratic choice because contests within these entities will generate a bitter spill-over from earlier conflicts. These historical impulses threaten to undermine the installation of simple democratic processes in many African nations. The AU as well as sub-regional bodies like ECOWAS must act with care and caution as they seek to resolve post electoral stand-offs like those in Cote d'Ivoire and elsewhere.

These problems create an atmosphere of virtual hopelessness when we contemplate the likelihood that democratic choice will be the instrument of popular development. Most crises that arise from electoral protests in Africa instead of releasing political energy for development seem to focus more on the legitimacy of the ambitions of particular individuals. As long as the conflict between public purpose and private concern form the core element of issues arising out of contested election results the omens for democracy in Africa will be ominous with doubts about the efficacy and relevance of Africa's democratic future.

A Note on a Response to My Columns
About the NDDC.
Someone has taken up the mantle of defence on behalf of those officials of the NDDC who were accused by their own Board of using an irregular route to transfer funds of the Commission to an overseas account. I am fully in support of his actions because we have always promoted the freedom of expression which is guaranteed in our constitution. I am not worried at all by the respondent's apparent belief that his best course of action is to pour insults and invectives on my person.

After reading his long and convoluted diatribe it strikes me however that he has still not explained why those he defends so vehemently actually wrote a letter claiming that a nonexistent board resolution existed. That is the crux of the matter and no amount of abuse can change that fact. Incidentally the Executive Directors who he seems to suggest had assigned me to write my columns have been most unfairly misrepresented since no one contacted me on this matter and I actually do not know any of them. Let the truth prevail!