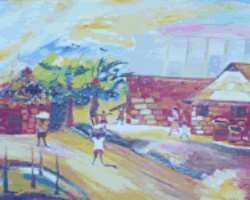 •Life in the rural area
The year 2010 recorded a robust season for the visual art sector. Aside contributing their quota to the nation's growth and development, visual artists took bold steps to make 2010 a memorable one. Many of the artists recorded enviable achievements either as collective or as individuals.

A major achievement in the sector was the International Art Expo organised by the National Gallery of Art (NGA) in collaboration with Art Galleries Association of Nigeria (AGAN) at the National Museum, Onikan, Lagos.

The expo, which celebrated the country's 50th independence anniversary, also showcased works of artists from 30 galleries within the country and abroad.

The week-long expo had Nduka Obaigbena, Thisday publisher, as chairman of the opening ceremony.

Curator of the expo, Mr. Simon Ikpakronyi, recalled the gains of the show, noting that the Nigerian visual art is progressing in all ramifications. He said aside the major theme: Art Promotion and Patronage in Nigeria, each gallery presented its own theme in respect of the nation's independence anniversary.

Also, the Society of Nigerian Artists (SNA), which is the umbrella body for visual artists equally fared very well in the year. The Lagos chapter organized the October Rain, featuring seminars, solo/group exhibitions among others. The SNA in partnering The Nigerian Institute of International Affairs (NIIA), also organised the first International Convention on Art and Development (CONADEV) 2010 under the theme: Engaging Art as a tool for sustainable development from September 20 to 26.

The convention featured a conference and art exhibition, while exploring the roles of arts in causing desirable changes in society. It also served as a major forum to bring together artists, researchers, literary icons, musicians and performing artistes. Mr. Oliver Enwonwu, chairman, CONADEV 2010, said the aim of the event was to arrive at a concrete set of resolutions, which could be developed into a policy document on the relevance of the arts to societal development.

At the end of the convention, Mr. Durodola Yusuf, won the CONADEV logo competition organised by the SNA. His logo was adjudged the best out of the 59 entries received nationwide and was presented with a N100, 000 cheque and a certificate while the first and second runners-up, Mr. Nwankwo Tochukwu Samuel and Karikarise/ Evans Justus, respectively were recognized.

Presenting the cheque and certificate to Yusuf at the Aina Onabolu Building, National Theatre, Iganmu, Lagos, National President of the SNA, Mr. Uwa Usen, commended the artist for his work which reflects creativity and aesthetic beauty.

With a mission to uphold excellence and attain the highest professional standards in the practice of visual art in the country, the Lagos State chapter also hosted held an exhibition of Watercolours, pastel and charcoal drawings at the Ben Enwonwu Foundation's Omenka Gallery, in Ikoyi, Lagos.

Also the exhibition highlighted the uniqueness of watercolour, pastel and charcoal drawings, against the seemingly overbearing preference for paintings rendered in oil and acrylic. Many themes were addressed in the exhibition ranging from maternal affection to environmental issues such as pollution.

At Biodun Omolayo Art Gallery, a training programme was organized for art enthusiasts at the end of which a 60-year old insurance broker executive painted to the admiration of his friends, associates and family. The gallery also gave Mr Prosper Okpue, Vice Chairman CEO of Insurance Brokers of Nigeria, a special treat as a collector while marking his birthday. The treat, which is part of the gallery's Celebrity Art / Lead Art programme is organized to honour regular collectors of the gallery particularly when celebrating their birthdays, wedding anniversaries, house warming or any social events.

Aside the group events, a number of artists also held their solo exhibitions particularly in Lagos and Abuja. Some of them include Stella Awoh, Aladegbongbo and Mufu Onifade. Mufu Onifade's Whisper Araism was exhibited at the Omenka Gallery, Ikoyi Crescent, Victoria Island, Lagos with a bold creative showcase of new works from his Araism technique. Some of the works include Sweet Father and Dreamland.

Also Awoh, a lecturer at Yaba College of Technology, (YABATECH), and Vice Chairman of Lagos SNA chapter, also mounted Hephizibah and Beulah from December 11 to 16 at the Omenka Gallery. The exhibition featured 15 artworks and 15 crafts. Some of them were A New Dawn, Greener pastures, Rose of Sharon 1 and 11, Unity, Aba Women Riot, Widower and Widow.

In commemoration of Nigeria's golden jubilee and two decades of his career as a visual artist, Hamid Ibrahim exhibited Content of Time at Mydrim Art Gallery, Ikoyi, Lagos. The works ranged from a mixture of abstract, impressionistic and expressionistic forms. On the list of the realistic works were After the Storm and Hero, while others such as Life Within Life 1 & 11 and Praise Worship reflected the abstract mode. Others include Reaching Out, Rattle and Peace Be On To Us.

Also, Aladegbongbe Aderinsoye, a YABATECH lecturer, staged An Anthropological Study Of Ilara-Mokin (Ondo State), A Visual Representation at the Yusuf Grillo Art Gallery, School of Art and Design, YABATECH. The artworks depict certain cultural practices and beliefs of a people in visual, contemporary forms.  Towards the end of the year, Temitayo Ogunbiyi, a Nigerian artist who is based in Rochester, New York, United States exhibited her work; Broken Weaves at the Terrakulture in Lagos. The uniqueness of this exhibition was not mainly about the drawing pieces but the installations, which were quite thought provoking. The works were exceptionally different as they demonstrated fresh themes and symbols.

One of the installation works, White Walls and White Weddings, was the cynosure of all. The work was made of Ogunbiyi's mother's wedding gown, and other pieces of cloth that belong to her dad and brothers. The work hanged loosely against a white wall, depicting the joy of wedding and the significance of white colour.

Also as Nigeria turned 50 last October, master woodcarver, Raqib Abolore Bashorun called on the people to return to the drawing board. The former Chief Lecturer/Head of Department, Graphics, School of Art, Design and Printing, YABATECH, used his mixed media work; Rhapsody, to remind of the promises made to Nigerians by successive administrations in the country. But none of these promises were fulfilled. Said the artist 'They promised us many things. They promised Water for all, Housing for all, Food for all, Vision 2010, and now, Vision 2020. We adjust boundaries and keep shifting goal posts,'

With 12 solo and over 20 group exhibitions showcased around the globe, Zinno Orara, a graduate of Painting and Illustration from Auchi Polytechnic since 1988, has come a long way as an enthusiastic artist. He held a solo exhibition of paintings entitled: Boundaries and Bridges at Quintessence, Falomo Shopping Complex, Ikoyi, Lagos to commemorate his 21st anniversary of unbroken studio expression.

Another exhibition of paintings by Olufolake A. Oluwasanmi, but curated by Adeola Balogun held at YABATECH. Oluwasanmi, a graduate of the National Teachers Institute, Kaduna, with specialization in Culture and Creative Arts' paintings were basically on pictorial and botanical compositions.

The event, which held at the National Museum, Onikan, Lagos, was organized to make children share their experiences and ideas through art on issues affecting the environment. The foundation too held the 2010 Art Summer Camp Programme at Omenka Gallery. The Omenka Gallery of the Ben Enwonwu Foundation (BEF) presented 'Fragments', an exhibition of paintings by one of Nigeria's outstanding contemporary artists, Sam Ebohon. Ebohon's art in the past fifteen years has developed into an impressive visual metaphor which singles him out as one of the more important names in the Nigerian contemporary art scene.

Apparently set to make a statement on the art scene, Adeola Balogun, a YABATECH lecturer also exhibited his experimental 30 pieces of work made of used tyres. Other activities within the art sector include the traditional pottery exhibition entitled, Pottery in Nigeria: A Countrywide Heritage, at the National Museum, Onikan, Lagos. The national event also featured the re-commissioning of Nigerian Governments: Yesterday & Today (Gen. Murtala Muhammed Gallery) organized by the National Commission for Museums and Monuments (NCMM), Lagos.

Deputy Director/Curator, NCMM, Ms Ashaye I. P, said the event was a departure from the normal exhibitions, adding that it represented a document for posterity. Meanwhile, Alhaji Abubakar Sadiq Mohammed, Minister of Tourism, Culture and National Orientation, said both the gallery and exhibition aimed at reminding Nigerians about their diverse but similar heritage, and the sacrifice of their founding fathers, some of whom unfortunately lost their lives to ensure that the country remains united and stands as an independent and sovereign nation.

Also, the National Commission for Museums and Monuments (NCMM) Lagos in collaboration with Shell Nigeria Exploration and Production Company (Snepco) held the 2010 National Art Competition for the physically challenged. The bi-annual event made its debut in 2003, with the aim of exposing the inherent talents of special children, aside motivating and encouraging them to take their rightful place in the mainstream of society.