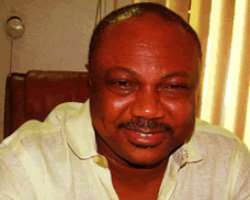 •Ogboru
As the Independent National Electoral Commission (INEC) put final touches to its preparations yesterday for today's governorship rerun election in Delta State, 25,000 armed policemen have been deployed in the state to provide security during the election.

Also armed forces personnel in Army, Navy and Air Force were also deployed to help in distribution of sensitive election materials especially to the remote areas in Warri North, South and South-west to where materials were either airlifted or sent through waterways.

The state INEC revealed yesterday that the men of the Air Force would help the commission in bringing in results swiftly from the collation centres, especially from difficult areas. As part of moves aimed at ensuring that the first major election under the leadership of Prof. Attahiru Jega was smoothly conducted, the INEC also deployed three other Resident Electoral Commissioners (RECs) from neighbouring states of Edo, Bayelsa and Akwa Ibom to help the Delta State Resident Electoral Commissioner, who was appointed barely three months ago.

The deployment of the detachments of security men was coming on the heels of the burning of the INEC office in Ughelli North Local Government during which the voters' register was destroyed.

Bur the Delta State REC, Dr. Ogbudu Gabriel Ada told newsmen in his office yesterday that a back-up register had been made available in place of the burnt one so that election could hold in the area as planned.

According to him, of the deployed 24, 835 policemen were 63 units of mobile policemen, comprising of 2, 800 personnel while the remaining 22, 000 personnel were regular policemen.

At the INEC state secretariat yesterday movements were restricted with combined policemen and state security services men frisking those coming in and out of the secretariat. Vehicles marked 'election duty' were seen moving in and out of the secretariat with INEC staff moving into them materials for distribution to the parts of the state. Other paramilitary personnel on hand yesterday to ease movement of materials were men of Federal Road Safety Corps (FRSC) and Security and Civil Defence Corps (SCDC).

Dr. Gabriel Ada explained that men of the Nigerian Army, Navy and Air Force had been on ground to help distribute materials and maintain peace in case of any eventuality during the period even as he assured that the army would only be on the streets to maintain peace while it was the duty of the police to safeguard the ballot boxes and other materials to avoid being snatched.

'Because of the importance we have attached to this election, we will make use of the Navy to distribute the materials while the Air Force will be used to bring the results swiftly to the main collation centre.'

On the general security situation, the Resident Electoral Commissioner said there was no cause for panic, as the security agencies had done well to restore peace in the area even as he warned that anybody caught subverting the electoral process in any way would be made to face the full wrath of the law.

'Even as we lost a lot of things there including the voters' register, we have been able to use our back-up to print another one which will be used to conduct the elections there,' he explained. The state chief electoral officer further explained that only the people with their voters' card whether temporary or permanent would be allowed to vote just as he warned anybody with his or her voter's card to stay away from the polling units, adding that it was for this reason that the commission had earmarked 8am to12 noon for accreditation while the election proper starts simultaneously across the state by 12 p.m.

On the controversies surrounding the candidature of Ovie Omo-Agege of the Republican Party of Nigeria (RPN), Ada said what INEC did was in line with the rules by allowing him to contest even as he was not a candidate in the 2007 cancelled election because the law allows for substitution of candidate on account of death. Said he: 'All that we have done here is legal, it is true that the candidate in question did not contest in 2007 but the electoral guidelines stipulated that in the event of the death of a candidate even a day before the election, the law states that the election be postponed for the next two weeks so that the party involved can field another candidate.

'The candidate of the RPN died and it is the right of that party to bring a candidate to INEC and we have no power to stop him from contesting the election.'