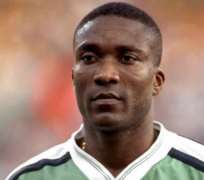 SAN FRANCISCO, Jan 07, (THEWILL) – A former center back of the Super Eagles, Uche Okafor, 43, has been found dead inside in his house in a small town called Little Elm near Dallas, Texas, USA on Thursday.

'His death has been ruled as suicide by hanging', the Tarrant County Medical Examiner's Office told THEWILL in a conference call on Friday morning PST.

Uche was found hanging in the house by his wife, Ifeyinwa according to an officer in the Tarrant County Medical Examiner's Office. He was found at 1.35pm.

But THEWILL gathered that a friend who could not reach Uche called Ifeyinwa at work and she returned home to find him hanging.

Okafor was a key member of the Super Eagles when Nigeria won its second African Cup of Nations trophy, in Tunisia in 1994. He was also at the 1994 and 1998 World Cups in the United States and France respectively.

According to reports, he had just signed a contract with ESPN as an African football analyst.