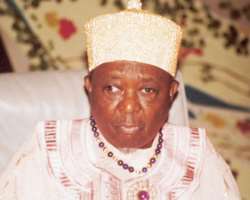 The Ooni of Ife, Oba Okunade Sijuade, Olubuse 1, Oba Lamidi Adeyemi, the Alaafin of Oyo and other prominent Yoruba traditional rulers, will be in Lagos for the three-day Yoruba World Film Festival (YOWFEST), organised by the Association of Nigerian Theatre Arts Practitioners (ANTP).

NFC learnt that the event, which begins today at the Banquet Hall of the newly rehabilitated National Arts Theatre, Iganmu, Lagos, will be chaired by the former governor of Lagos State, Asiwaju Bola Ahmed Tinubu.

Other dignitaries expected at the event include Oba Rilwan Akiolu and the governor of Lagos State, Babatunde Raji Fashola, who is the chief host, among others.

The festival, according to ANTP President, Prince Jide Kosoko, will feature a special meeting of indigenous language film makers irrespective of association or tribe, to discuss the prospects and challenges of films in local languages.

Kosoko said that there will be a film market where manufacturers, leasing company representatives and professionals in the industry will get special festival deal.

Other activities are seminars/workshops, book launch, cultural performances and Yoruba film fund, a special fund for promotion of indigenous films.

Jide Kosoko said that the opening ceremony, which holds on Sunday, will be attended by Ambassador Segun Olusola, Oba Lamidi Adeyemi, the Alaafin of Oyo and others.