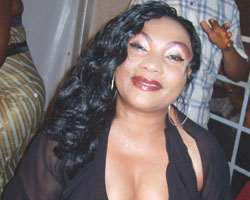 Last Friday, when the first flight, that is, the Soul Train of the Nigerian Music Awards took off at the Murtala Muhammed International Airport, NFC ran an interview with Chief Tony Okoroji who claims to own the right to the NMA.

Despite all odds the train moved to the Sam Mbakwe International Airport and the first visible thing on arrival at the airport was a branded vehicle with NMA logo and that of Imo State governor, Ikedi Ohakim that confused the first timer at the state capital, whether it was a music award or rally in support of the incumbent governor. Apart from the buses, there were posters and flyers with the same logo.

The carnival-like train with over 50 vehicles and two limousines conveyed Nigerian music stars, actors, actresses and Entertainment practitioners, to the Imo Concorde Hotel, where they were received by some government officials including the state Information Commissioner.

Against the promise by the Okoroji-led Tops Event, organisers of the event, many music stars who were given the “treasure box” containing flight, accommodation and feeding tickets, had difficulty securing accommodation at the hotel that was a co-sponsor of the event.

As the cloud of the accommodation problem was about to clear, the first event at the Banquet Hall of Concorde Hotel, which is a dinner with the music stars, commenced.

The hall was full to capacity and a lot of music stars had to stand on their feet throughout the duration, even as security operatives and members of the organising committee found it difficult to control the crowd.

In the process, many music acts, movie personalities and journalists were rough handled at the entrance as it became an all comer's affair.

A drama which could have caused an uproar if not quickly nipped in the bud was when a member of the organising committee asked veteran juju musician, Pa Fatai Rolling Dollar, to vacate his seat for Ucheria Anunobi, who was late for the event. He was later cautioned by those in the hall.

The event which was supposed to be a night of music and dinner turned out to be one of praise singing and homage paying to the governor of Imo State. It became so boring to the extent that many stars abandoned the cold dinner as time was fast running out.

The planned trip to some tourist centres like Oguta Lake was cancelled for poor organisation and worse still, those who came to Owerri on the second day were also busy looking for accommodation.

Saturday, the awards day, was worse as the Arcade near the Imo Concorde Hotel became an all comer's affair. There were lots of security lapses as music stars and actors found it difficult to gain access to the Balmoral Tent, where the event took place, while petty thieves and hoodlum had a field day picking pockets and stealing valuables. Yours truly lost a valuable wrist watch in the process.

During the awards proper which was devoid of the razzmatazz and hype given it, from the comedian to the organisers and award presenters, it was praise singing galore for Ohakim, who was grining and whispering to his wife all through, while music interlude provided by Geterman, Mamuze and Sammy Okposo was drab.

Some of the flaws in the awards is in the area of organisation, planning and presentation, as movie stars were given prominence than their counterparts in music circle, even as some of them who were supposed to dress glamorously were not properly dressed.

When the event ended at about 2.30 a.m., it was good riddance to bad rubbish!