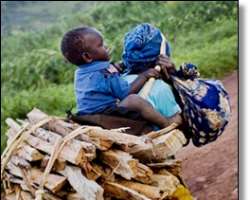 he greatest challenge that Kenya (and by extension African countries) will face in 2011 is how to transform their countries into people's republics. Kenya has lost its leaders. They are preoccupied with fights over who ought to have power over the hunter's knife that brought down a meaty carcass at independence. As they fight a few paces from the fallen animal, hyenas have grabbed the chance to bite off huge chunks of the carcass. What will women and children left at home eat if our hunters are at war with each other?

A story is told about a certain town in Western Kenya that got its name from the courageous action and decisions of those who were once in Kenya's (and by extension Africa's) predicament. One day, the story goes, Maragoli warriors had war with their neighboring community. It was so fierce that nearly all the men were speared to death. Noticing they were outflanked, a section of warriors took off at the highest speed possible.

Their women countenanced bloodied warriors on the run and asked: "If the men are running way from the enemy, who will defend us?" The women picked up the spears and shields of their fallen warriors, uttered war cries and headed to the war front. Confused; the enemy's military tacticians invoked the sacred law that women are not to be attacked in war - but the enraged women could not respect such laws. The women started spearing the enemy, forcing them to abandon their raid and take off. The women were fully aware of the consequences of not defending their homeland - captivity. I'm told that is how "Chavakali" got its name. "Chavakali" from the Maragoli "Shabakhali," means a place that was saved by women or simply; the place of women!

Kenyans signed onto a constitutional covenant on August 4th 2010 creating a structure that ought to safeguard their interests. They then send some waheshimiwas to parliament to safeguard Kenyans' interests. They send their sons and daughters overseas to learn the Whiteman's games and tricks. For over 47 years, Kenyans at home have been monitoring the situation at the warfront. The only news that gets home is that the hunters are at war with each other. More news coming in indicate that different species of animals (read re-emerging and emerging economies) have been sighted near the carcass. The hunters might not even have time to salvage some bones to enable those waiting at home to prepare bone soup! Things are what Kenyan youth refer to as "Nikubaya or Noma!" (Things are bad!) Kenyans and by extension Africans in general are faced with the predicament Maragoli women faced over 100 years ago.

You can take the weight off your feet, pass the time, join rent-a-crowd squads, sale your vote, and buy cheap propaganda - but the point is -"nikubaya!" We are faced with economic captivity, political colonization and complete destruction of attempts to create a Kenyan and African software that ought to guide our engagement with the rest of the world. We can now see our bloodied soldiers on the run from the war front. Each one is taking solace from their ethnic communities.

Maragoli women had the option to simply nurse and clean the wounds of their sons; but they didn't. It was clear to them that the actual danger was not in a wounded soldier on the run but in what attacked their sons in the first place. The women aimed their spears at the enemy. A huge monster called impunity (lack of rule of law) is ravaging our motherland. People power must take aim at its heart!