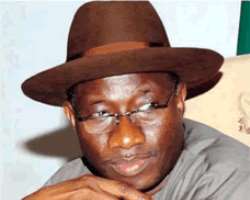 Aggrieved chieftains of the ruling Peoples Democratic Party (PDP) who are in court to stop President Goodluck Jonathan from contesting the presidential election on the platform of the party have prayed the court not to regard their suit as an intra-party affair but a constitutional matter.

While urging the court to throw out the preliminary objections raised in the suit by the PDP, the plaintiffs explained that the subject matter before the court was a constitutional matter bothering on the interpretation of the provisions of Section 14 [3] and 223 [2] of the 1999 constitution, Section 87 [9] and 10 of the Electoral Act 2010, and Article 7.2 [c] of the PDP constitution as it applies to the party's National Caucus resolution of December 2, 2002.

They were responding to the preliminary objections raised by Counsel to the PDP, Chief Joe-Kyari Gadzama [SAN] praying the court to strike out the suit.

In the suit, Ambassador Yahaya Kwande, Hon. Dubem Onyia and Alhaji Lawal Kaita, all card-carrying and financial members of the ruling party had asked the court to restrain the PDP and its National Chairman, Chief Okwesileze Nwodo from presenting President Goodluck Jonathan as their candidate for the April 2011 presidential election.

The plaintiffs are also seeking an order of the court restraining the Independent National Electoral Commission (INEC) from accepting President Jonathan as PDP's presidential candidate for the 2011 presidential election.

But in a preliminary objection filed on behalf of the PDP by its Counsel, Chief Joe-Kyari Gadzama (SAN), the party said the Plaintiffs lack the requisite legal standing to institute or sustain the action in law, noting also that there was no reasonable cause of action that lies against the party.

In praying the court to disregard the objections of the PDP and assume jurisdiction on the matter, the plaintiffs urged the court not to 'wring its hands or watch with hands akimbo and watch party leaders play gods over their subordinates knowing full well that when such disputes get to court, the courts would refuse to adjudicate on the grounds that they are the internal affairs of the party.'

They disagreed with the party's position that their action was the internal affairs of the party and that they had not exhausted the internal mechanism within the party to resolve their grievances.

They drew the attention of the court to the decision in the case of Ugwu Vs Ararume (2007) 12 NWLR wherein Justice Mohammed said:

'The courts have no interest in who should be the a candidate of a political party but are very much duty-bound to interpret the laws as made by the legislature so as to determine whether or not in the exercise of its rights of sponsorship or nomination, the political party has complied with the relevant provisions of the law laid out to regulate proper conduct so as to guarantee orderliness, peace and equity in the political arena. The judiciary cannot be said to be dabbling into the internal affairs of the political parties when it performs its constitutionally assigned role of interpretation of the laws…the political parties should be disciplined enough to obey the laws of the land and their own constitutions so as to assure the people of their readiness to defend the Constitution of Nigeria if entrusted with political power, the rule of law has come to stay'.

They contended that the decisions in Onuoha and Dalhatu are irrelevant and inapplicable in the instant suit. The law has since moved further. It is not actions clothed or garbed with 'internal affairs of a political party' that our courts should refuse to adjudicate. There is a judicial activism at work and the trend is not subscribing to the school of thought. The courts must not wring its hands or watch with hands akimbo and watch party leaders play gods over other subordinates knowing full well that when such disputes go to court, the courts will refuse to adjudicate.

'The court is the last hope of the common man; the judiciary is also known to be the bastion of justice. Where the court refuses to mediate in such disputes, it may have a ripple effect and heat up the polity.'

In the objections brought by the PDP, Gadzama, who described the plaintiffs' suit as an abuse of court process said the issue of nominating or electing who should be a party's presidential candidate was an intra-party matter for which the PDP had various administrative and legal mechanisms, which were yet to be exhausted by the plaintiffs and the exhaustion of the administrative and legal mechanisms constitutes a condition precedent before legal action can be commenced.

'The action is premature, non-justiciable and this Honourable Court is functus officio having determined the same issue in an earlier suit (SUIT NO FCT/CV/2425/2010 (SANI AMINU DUTSINMA -V- PDP & ANOR). The action ought to have been commenced by a Writ of Summons', the party stated.

A four-paragraph affidavit in support of the preliminary objection, averred that the PDP's constitution stipulates that aggrieved members of the party must exhaust all its remedies as provided before resorting to litigation, adding that it was an offence punishable by disciplinary actions for its members to side-step these remedies and proceed to court.

The plaintiffs dragged the PDP, its National Chairman, Chief Okwesileze Nwodo, President Goodluck Jonathan and the Independent National Electoral Commission (INEC) before an Abuja High Court seeking an order stopping the PDP and INEC from fielding and accepting President Jonathan as the party's presidential candidate in the April, 2011 presidential election.

They equally want the court to declare that PDP is bound to allow a candidate from the Northern geo-political zone to contest for presidency in 2011 presidential election so as to complete the Zone's eight years slot in producing candidate for the election into the office of the president.

The court presided by Justice Ishaq Bello has adjourned the matter to January 6 and 7 respectively for hearing.