AUDI LIFTS A5 QUATTRO FOR 2011 CHALLENGES 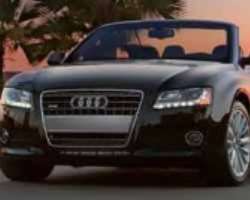 AUDI has fortified its A5 Quattro for the 2011 model year.   New A5 Quattro boasts of an optional eight-speed automatic in place of its old six-speed.

The Audi A5 is available only with a turbocharged four-cylinder engine, while the two-doors from the competition are usually available with six-cylinder engines of various configurations and outputs.

New Audi A5 is available in coupe and cabriolet (convertible) body styles. Both are available in Premium, Premium Plus and Prestige trim levels.

The coupe features a tilt-only sunroof, while the cabriolet gets a power-retractable soft top and a wind blocker. The options list includes heated front seats, Bluetooth and an iPod/USB audio interface.

In terms of safety, Antilock brakes (with brake assist), stability control, front-seat side airbags and side curtain airbags are all standard on the 2011 Audi A5. The Prestige can be equipped with a blind-spot warning system, while the adaptive cruise control alerts the driver and primes the brakes for full stopping power if a collision seems imminent.