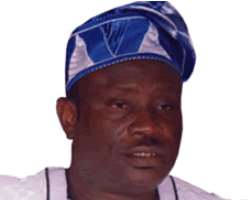 Eleweomo
The dust thrown up by last Thursday's gruesome murder of the factional leader of the Oyo State chapter of National Union of Road Transport Workers (NURTW), Alhaji Lateef Salako (a.k.a Eleweomo ) is yet to settle, as the Senate Leader, Senator Teslim Folarin at the weekend asked the Inspector General of Police, Mr Afiz Ringin to set up an independent probe panel to investigate circumstances that led to Salako's death.

Eleweomo was killed during the Peoples Democratic Party (PDP) local government congress held at I.D.C Primary School, Ona-Ara and Senator Folarin had been accused by both the state government and the loyalists of the late unionist of being responsible for his death.

The Senator was alleged to have ordered his security aides to attack Salako after a violence erupted at the venue of the congress, which eventually led to Salako's death. The state Police Commissioner, Alhaji Baba Adisa Bolanta has already arrested all the four security aides attached to the senator and issued an invitation to Folarin to report at the command headquarters latest by Tuesday failure of which he may be declared wanted.

But the Senator in a telephone conversation with journalists in Ibadan declared that he had lost confidence in the police boss, wondering why Bolanta would go the extent of making false claim that the bloody clash started immediately he (Folarin) arrived at the venue of the congress with his mobile police escort and political thugs.

Folarin said the police boss went as far as withdrawing all his personal security aides, to expose him to danger, stressing that Bolanta had concluded on the matter before commencing any investigation at all.

Folarin said the only way, the police could do a thorough investigation was for the Inspector General of Police to step into the case by setting up an independent probe panel into the matter, adding that there was no way the Oyo State Commissioner of Police, Alhaji Bolanta would handle the investigation on the death of Salako without bias.

He maintained that the handling of the case by Oyo police boss would not allow thorough investigation on the matter, adding it was only when the IGP stepped in that his innocence on the death of Salako could be proved. His words: 'I don't know what the Police Commissioner and Governor Akala want to gain by trying to robe me into the killing of Salako when I was not at the venue of the congress when the crisis started.'

'This is unbecoming of a Police Commissioner who failed to do his findings properly but resolved into coming up with a bias report of an event he is yet to investigate. How can he descend to the level of releasing unfounded police report to the media just to implicate me to satisfy Governor Akala, it's unfair. I am calling on the Inspector General of Police to take over the matter and raise an independent panel to investigate the matter,' Senator Folarin said.

He pointed out that being a Senate Leader of the Federal Republic of Nigeria, does not give him the privilege to order the killing of fellow Nigerians. He then commiserated with the family of the factional NURTW chairman, adding that the Police authorities should do all within its power to fish out those behind the dastardly act but not with Bolanta in control of the investigation, so as not to play politics with an issue of such magnitude.