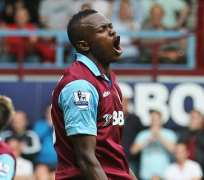 The Inter Milan forward is currently at Upton Park on a season-long loan with a view to a permanent move at the conclusion of the campaign. While West Ham has struggled at the wrong end of the table, Nsofor has caught the eye with a series of dynamic displays down the left flank.

If reports are true, Villa's boss, Gerard Houllier, is monitoring the situation but Obinna, who spent last year at Malaga, is ready to settle down in East London, saying: 'If West Ham want me then I'll speak to them because I am happy here and the Premier League is sensational.

'I have been out on loan a lot in recent times and my desire is just to settle. I would like to be here in England – even though I do not like the weather.'

To date, Obinna has made 14 league appearances for West Ham and scored one goal.