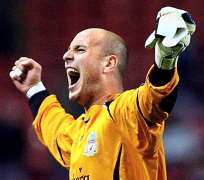 The Spanish international has been mentioned as a £20 million target for Manchester United and has also been linked with Arsenal and Real Madrid. The 28-year old signed a new six-year contract only last season and has seen the Reds struggle under new boss Roy Hodgson this term.

But the Villarreal former goalkeeper claims that he is committed to seeing out his contract, which would take him to 11 years at Anfield. He told the Daily Star: 'I'm tired of rumours linking me with many teams in England and abroad.

'I am a man of my word and commitment. I will honour my contract with Liverpool. Stories of these offers are not true. I have not spoken to anyone – ever – and I am 100 per cent a Liverpool player.'

The 2006 FA Cup is the only major honour Reina has won with Liverpool and he is determined to help bring back the glory days to Anfield after missing out on this season's Champions League.

'Since I've been here I've found an incredible passion, more than I thought from Spain,' he added. 'Liverpool, as a club, is sacred, it is something special. Being Liverpool's goalkeeper is a privilege. For now, I just want to win trophies for them.'