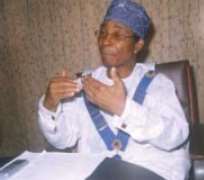 Dr. Herbert Ademola Bertley Ajayi recently emerged the President of Nigerian Association of Chambers of Commerce, Industry, Mines and Agriculture (NACCIMA). A doctorate degree holder in Engineering Management, Ajayi has been variously described as an icon of organised private sector, having headed several bodies since 1972, when he ventured into private business, after his management experience with UAC of Nigeria Plc. Quoting copiously from NACCIMA's position papers, Ajayi, who had also earlier served a President of Lagos Chamber of Commerce and Industry, in this interview with Business Editor, ADE OGIDAN, reviews the state of the nation and proffers leeway to Nigeria's economic emancipation. Excerpts.

Congratulations on your emergence as NACCIMA President. How would your experience as former President of Lagos Chamber of Commerce and Industry (LCCI) impact on your new assignment?

Definitely, my experience at LCCI will be useful in this new position. Being the biggest chamber of commerce in the country, the experience at LCCI covers all vital areas of chamber movement, namely advocacy, business development, trade missions, trade fairs, diplomatic relations, among others. I had to deal with virtually all sectors of the economy and gained a lot of knowledge from those sectors. Also, as Chairman of the Small and Medium-Scale Enterprises (SMEs) group, at a time, I know what the issues are with small businesses.

Specifically, how do you plan to reposition NACCIMA?

My predecessor has done a good job, so, I will build on what he has done and in addition, strengthen the advocacy capacity of NACCIMA, work closely with all the chambers of commerce across the country to make the system more inclusive, strengthen the process of dialogue with the public, facilitate the setting of priorities by government in favour of those things that will improve the investment environment, invest more in human capital development in NACCIMA and work closely with other arms of the organised private sector.

The swan song among operators of the private sector has been the lingering parlous infrastructure in the country.

Do you think the power sector reform could be the expected magic wand?

We welcome the reform and hope it will have the desired impact. The initiative is good because it will give the private sector a bigger role in the power sector.

However, the challenges of privatisation should not be underestimated, going by the experience of NITEL. Power Holding Company of Nigeria is even a more complicated enterprise. Government should think through the process properly. Labour issues inherent in the reform should however, be properly addressed.

There have been great expectations in the new year. In retrospect, how would you describe the state of the nation in 2010?

The year 2010 has not been like previous one in our nation. It is the first year since independence in 1960, when the annual budget was not presented to the nation or National Assembly, but simply dumped by the agent of the President in the Senate and House or Representatives. It was also the year that the President of the Federation spent many months in hospital outside the country without informing the National Assembly that the Vice-President should act for him. This was later to generate the 'doctrine of necessity' that permitted the Vice President to become Acting President. Although the president came back from abroad in early May, he passed on a little later while the Acting Vice President became the President. A new Independent National Electoral Commission chairman replaced the one who conducted the most controversial election in the nation's history. An election timetable has been released and politicians are now hustling for April 2011 elections.

Taken together, all the developments indicate that Nigeria today stands at its momentous period since the civil war ended on January 15, 1970. It can no longer be business as usual as positive changes from the locust years of the recent past must give way to sustainable and dynamic growth of our economy. Nigeria cannot remain a dumping ground for all types of imports, but must feed itself and export, not only crude petroleum and gas, but refined products- petrochemicals and high value products. Before this can be done, we must become globally competitive with excellent productivity.

In respect of global competitiveness, a report by World Economic Forum marked Nigeria low. But some government officials faulted it. What's your comment on the assessment?

This is the most widely accepted report that measures human development. In this measurement, 12 major pillars were used to indicate productivity and competitiveness. They include institutions, infrastructure, macroeconomic environment, health, primary education, higher education and training, goods market efficiency, labour market efficiency, financial market development, technological readiness, market size, business innovation, among others. Each of these pillars has several components. A few examples will make it clearer.

For example, on productivity, Nigeria recorded abysmally low figure, even as authenticated by the Central Bank of Nigeria. On health, Nigeria was rated among the last 10 countries with highest infant and maternal mortality in the world. It also belongs to the top 20 with the lowest life expectancy.

In respect of education, we belong to the bottom 30 countries with the lowest primary school enrolment, while our higher educational institutions turn out graduates that are generally unemployable.

From the situational factors on the ground, these facts cannot be controverted. Trends in the country now are even pointing to the fact that we are not addressing these unsavoury situations.

But the strategic focus of the national budgets should have been addressing the anomalies.

Budget performance generally is still not satisfactory because of excessive concentration on recurrent spending at the expense of capital spending. This could account for the extension of this year's budget life span to March 2011. Corruption is still an issue and capacity for budget implementation is still weak. Citizens are yet to see the direct impact of the budget on their lives.

The issue of corruption has even become more worrisome. Assessment of the Transparency International, according to its last report, shows that a lot still needs to be done to tame the monster.

In the assessment, while Nigeria scored 2.4 points out of 10 or 24 per cent, Ghana scored 4.1 or 41 per cent occupies 62 positions from the top. We have Liberia and Sierra Leone as neighbours. Nigeria simply stinks in corruption, which is getting worse. It has become endemic and has permeated everything. The so-called 'Nigerian factor' is synonymous with institutionalised corruption and has almost completely overwhelmed the public sector, while even the organised private sector has become susceptible. Excessive politicking has manifested in all federal institutions and agencies and is responsible for fiscal indiscipline everywhere.

Don't you think the zonal constituency projects being implemented by legislators could have blown up the figure in respect of National Assembly's expenditure?

Note that there are 469 Federal Constituencies in our country, 360 Representatives and 109 senators. Sharing N100 billion into 469 projects give N213.22 million per constituency. I hope this amount is not paid to each federal legislator. Otherwise, the total amount received by each National Assembly member could amount to N507.495 million ($3.383 million).

Nigeria cannot afford to continue this drain on our economy. It must stop.

From what has been stated so far, it appears that the executive arm and National Assembly members are joint collaborators for the abysmal performance in over 11 years of democratic governance in our nation. The nation's appropriation Act has grown over 1400 per cent over this period with nothing positive to show for it. The cost of maintaining the members of National Assembly is almost ten times higher over the same period the excessive cost of governance has become scandalous and unsustainable.

Further petroleum products importation should be deregulated immediately to enable us to save the nation the huge sum of over N600 billion that is spent on subsidy and Petroleum Equalization Fund yearly. This amount of about N4 billion, is sufficient to build 300,000 barrel refinery. Over the last five years, three refineries with nearly 1,000,000 barrels capacity would have been built, thus making Nigeria refined products exporter like other OPEC countries. It is shameful that over 50 years of crude oil exportation, we still import refined products.

Moreover, agriculture, which still contributes 42 per cent to the GDP and employs 65 per cent of total population does not receive up to one per cent of the total loans available in our country. Nigeria must be the only nation on the planet that treats agriculture with so much levity and disdain. The Federal Government should invite China and India to teach it how they exited from being the bread basket economies of the world in the late 1970 to early to 1980s and become two of the leading food exporters today. This is the only industrial sector that can employ more than 10 million productive labour in production storage, processing and marketing within the next five years. It will guarantee both food security and sovereignty, in addition to valuable export earnings.

Finally, the Federal Government should stop any form of external borrowing immediately, while it pursues recently all those owing it huge sums of money.

What specific plan of action should be adopted by the government to address these issues?

By divine providence, our nation now stands at a historical turning point. The cost of governance, especially the jumbo cost of the National Assembly members are receiving adverse reaction, from all sectors of the population.

Consequently, in respect of the 2011 Appropriation Bill (Act), notwithstanding our earlier submission through the organised private sector, we should demand that the project cost of governance is no longer tenable and should be drastically reduced. It is through the appropriation Act and its supplementary additions, that funds are channelled to fund corruption that has plunged the nation into poverty and international ridicule.

What should be the populace's expectation in this election year?

We should demand from politicians a firm commitment to good governance by organising Presidential debates through which all the issues raised earlier will be properly addressed. The debates should involve three or four major parties candidates selected through public opinion polls by the leading Pollsters.

The organised private sector should encourage state members to carry out debates among gubernatorial, senatorial and representative candidates at state levels. It is suggested that these debates are carried by major media organisations, which include television, radio and newspapers, with economy as the key campaign issue.