GLADIATORS TO WATCH IN 2011 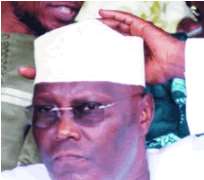 Atiku
This year, 2011 will definitely be a historic year in Nigeria. It is a defining year politically because it is the year Nigerians would be electing a new set of leaders. Ordinarily, an election should not be a big deal but due to past experience where the people's votes were allegedly made not to count with the result that wrong people were foisted on Nigerians as their representatives.

The nation is already on edge because of the failure of leadership in the country over the years. Sunday Sun in its characteristic manner brings those whose actions( or inaction) would shape the lives of Nigerians in 2011.

Professor Attahiru Jega
Undoubtedly, Professor Attahiru Jega will be the most important man in 2011. He has a date with history. The former Vice Chancellor of Bayero University Kano was handed a tough job and his reputation would either be damaged or enhanced after the assignment. He is to act as the nation's electoral umpire for the all-important 2011 election.

Unfortunately, Nigeria does not have the right caliber of politicians ready to accept defeat whether the election is free or not. That coupled with the fact that the electoral umpires have always been short in credibility further makes Jega's assignment tasking. The former Vice Chancellor has to squeeze water out of the rock. He has to convince a skeptical and apathetic Nigerians that their votes would count this time.

Since 1999 when the military supervised the election that heralded the present civil rule, successive elections have always been hotly disputed by aggrieved candidates. The development has resulted in the cancellation and ouster of some elected officials. Ahead of the 2011 polls, there is already a lot of apprehension in the country, with the presidential elections attracting the most attention.

In the past, the issue of election violence, ballot box snatching and vote rigging has impugned on the credibility of results, and the general insecurity in the country has made next year election even more critical.

Pundits are already predicting a massive transformation in the political equation of Nigeria, considering the recent agitation for electoral reforms and the mass disaffection within the dominant Peoples Democratic Party (PDP).

It is only a credible election that can guarantee that the vote of the people counts and the responsibility for that rests on Jega's shoulders.

Goodluck Jonathan
President Goodluck Jonathan will definitely be a man to watch in 2011. He is on the threshold of history as he might be the first man from the oil-rich Niger Delta region of Nigeria to be elected as Nigeria's president.

He is presently the President of the country following the untimely death of late President Umaru Yar'Adua after a protracted disease known as pericaditis.

Although his candidacy is still being disputed by a section of members from the North, observers believe he might romp to victory if he is able to successfully execute reforms in the power sector and other areas begging for attention. He might etch his name in gold both in the minds of Nigerians and in the history books.

Okwesilieze Nwodo
Okwesilieze Nwodo is a man that would be at the centre of a big storm in 2011. How he manages the crisis that would trail the primaries of the party starting from January 6, 2011 will determine, to a large extent, the future of PDP. The PDP might break or be made stronger during his tenure as chairman.

Already, there are vociferous complains over the congresses of the party which observers fear could result in mass defection from January. He will need more than managerial acumen to starve off the crisis that is about to hit the party.

Olusegun Obasanjo
Former President Olusegun Obasanjo is a man whose influence would loom large in 2011. Although he seems to have been shoved aside by the powers that be in PDP, he is likely to show his hands in the New Year.

Obasanjo remains the only man that has support and influence all over the country.

Atiku who contested the 2007 Presidential election on the platform of the Action Congress (AC) had doggedly challenged President Jonathan for the Presidential ticket of the PDP, insisting that the death of late President Umaru Yar'Adua did not mean an end to the eight years of Northern Presidency.

His selection by the Northern Political Leaders Forum as its consensus candidate for the PDP ticket has further made him a man to watch. Although he doesn't have the luxury of incumbency that President Jonathan enjoys, his experience in election primaries as well as the caliber of his associates might be a plus when push suddenly turns to shove at the Presidential primaries in January

Asiwaju Bola Tinubu
The former Lagos governor will have his hands full in 2011. His reputation will either be enhanced or diminished in 2011. The recent victory of his party, the Action Congress of Nigeria (ACN) in Osun and Ekiti states has suddenly shot his fame to high heavens and also made him a prime target for those desirous of halting the death of the PDP.

His determination to organize an alliance to face the PDP in 2011 also makes him a man to watch out for. Should the alliance succeed in unhorsing the PDP, Tinubu will emerge a hero and a key political leader in Nigeria, but should the alliance effort fail, he will be worsted.

Muhammadu Buhari
Muhammadu Buhari will have his hands full in 2011. He is set to contest the nation's presidency for the third time. He lost the 2003 and 2007 Presidential election controversially. He has said the 2011 effort would be his last and he won't challenge the outcome in court.

The retired Army general is already in the midst of an alliance that can permanently reshape the political history of Nigeria. His party, the Congress of Progressive Change, is already creating wave in the north and should the zoning crisis in PDP boil over, he might be the direct electoral beneficiary of the face off as northerners might decide to settle for their kinsman instead of an Ijaw man from Bayelsa.

His alliance partners, the ACN might just supply the votes from the southern part to hand him a shocking victory. Observers believe that Buhari, a former head of state, remains the best man for the task of ruling Nigeria due to his uncommon ability to tame his greed. The Katsina politician remains the only past former leader without a personal house in Abuja or Lagos.

He was to later shock members of the National Assembly with a declaration that they consume over 25.2 percent of national revenue. His decision not to apologize or withdraw the statement definitely must have made many enemies that would be baying for his blood in 2011.