2011: IT WORRIES THAT JEGA WORRIES 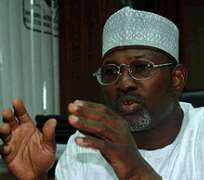 Jega
Those who say they knew had initially declared that Prof. Attahiru Jega, boss of Independent National Electoral Commission (INEC) is certainly not chicken-hearted. Of course, he couldn't have been. As chief of Academic Staff Union of Universities (ASUU) in his days, when the military virtually denied us any form of breathing space, he had his head up. He did not sell out. He actually ruffled establishment features and stayed the course.

Now, as boss of INEC, he had started with great promises of confronting the assignment with the zeal, anchored on well rehearsed success plans. He initially appeared so confident that many had believed, and thanked the gods that the real man for the job had arrived.

Then, he started asking for money; so heavy an amount, and even curiously, his request of N75 billion resulted in his being granted N87 billion. Well, that is not even the issue now.

The issue at the moment is that Jega worries so much these days. He has so harped on the threats and indeed, the possibilities of the elections being truncated by persons who never wished or even believed that Nigerians should decide who governs them.

But what has been of greater concern is that Jega, who, some months previously, was brimming with staggering confidence; certain of what he could do, having made up his mind to stay the side of honour; has suddenly started voicing some unsettling uncertainty. In fact, according to newspaper reports, he is now scared. No longer sure of what he had planned to do or how he would meet the politicians, who, in their best elements, can be described as the violent masquerades, which pretend they are fellow Nigerians, but which will smile as they smash the entire structure and textures of national meaning.

But who is likely to be frightening Jega? Or, what was it that has shaken his confidence?

In one recent outing, he marvelled at the temerity of anybody to dare steal the 20 pieces of direct data capturing (DDC) machines imported for voter registration. He was said to be jolted by the capacity of politicians to tell lies, as they script and execute evil. And he was said to be incensed by the dominant habit of falsehood, wickedness, selfishness and intransigence exhibited by power seekers, some of these exhibited like in raving madness.

One close source even hinted that Jega appeared to favour the argument that politicians should go for psychiatric tests to get the clean bill or otherwise, to contest elections. Yet, what worsens the matter was said to be what Jega appeared to understand as the capacity of politicians to blackmail, confuse and nail officials, to get them to bend. And he hardly understands the high volume of cash being moved about by politicians to penetrate his structure. Nobody can vouch for the reliability of officials in the face of such earth-shaking volumes of cash.

That is to say that Jega, the Ivory Tower intellectual, had underrated politicians all along. Yet, somebody would argue that he had the experience of ASUU politics.

Well, you would ask back, who is ASUU politician compared to the raving national and state politician who is prepared to kill, maim and burn to get 'there?' ASUU politics or whatever its offices offer is nowhere near what accrues from the national, state and local government politics, three of which have proved to be the most lucrative businesses in Nigeria and other Third World States .

Of course, the kind of politicians - the real men, the tough Okwomma masquerades – Jega is dealing with, now, could not have been the type he met as he fought and became the chief of ASUU. University politicians hardly break bones. They hardly see contests for positions as 'do or die,' and they run on certain principles, deviation of which would sound heretic in the environment. They have limited cash, and may even be too polished to descend to Purgatory to get it by hook or crook.

But in reality, Jega's problems, especially anchored on his kind of mindset, are bound to occur. Having come on a national wave of emotions, which amplified national hunger for an election that should be called ours, the Prof took it for granted that politicians would accept the need for a decent, reliable, election now. Though, with sound education, vast administrative experience and analytical mind, at least to the point of theory, Jega must be quite appreciative of the shifting values of national mood.

Yet, because of such mindset, which anchors on perceived general receptivity, he may have failed to understand that politicians take off from where national mood stops. Indeed, politicians let the mood show the right tracks for exploitation, actions likely to make the masses believe that they, the masses - whoever they are - have taken charge of their affairs. That is always the perfect cover for the politicians to do the real thing under the shade.

Now, just for a test, can you take a census of politicians who have voiced, even vehemently, their hunger and prayer for genuine elections? Everybody is on the train! Have you ever seen one arguing that rigging is the way? Nil! Everybody has to run the national steam of calls and prayers for credible elections, but what is done beyond the views of the people is quite different. Those who do not know will hardly understand the duplicity.

Of course, we join Jega in worrying, not that we do not know that politicians can unleash far more harm and distortion than the professor is mortally scared of. If any person is in doubt, let him take a look at what is going on in the states. One common trend is that sitting governors are not prepared to take in the views of those who wish them off the throne. And they work hand in hand with various police commissioners to intimidate and oppress the people.

Recently, in one of the states, the governor, never to brook any form of opposition, ordered his Chief Security Officer, CSO, to assemble policemen and thugs, to invade and brutalise elements of opposition who had convened in a private hotel. The thugs did the real job of destruction and bodily harm, while the police provided the cover. Where the thugs fired hundreds of ammunition, the police claimed they did that. Where the hotel owner tried to lay claims against identified thugs, the police stepped in and stated that their men did the damage in self defence. And when you ask the police why it had to invade a private hotel, a business belonging to a law abiding citizen, they claimed they had information that somebody was breaking the law within the hotel premises. When again the police were asked to name the person who gave them the information or who invited their intervention, they claimed that they had to protect their informants.

Finally, when asked what the governor's CSO was doing in the hotel at the time of invasion, they charged that he was representing his boss, who, they said, was the chief security officer of the state. Now, hasn't the circle closed?

That is the major source of worry, and which Jega should be ready to handle. The greater capacity to injure Jega's credibility and that of his elections belongs to those in government, indeed, in security. The worst twisting of truth, the greater threat to freedom of participation in elections and the certain track for discrediting of the Jega project will remain the police.

Indeed, again, the stealing of the DDC machines, which shook Jega like an earthquake, was the doing of security agents. Those who will chase away the rightful voters from the polling booths are security agents.

Those who understand elections - the Nigerian type – can tell Jega to tell the national security chiefs that no rigging of any election takes place without the active collaboration of the security agents – in fact security chiefs in the states – especially police commissioners. In some cases, they actually spearhead it after collecting huge sums of money. This, of course, is a hint for the need to bring in the name of each police commissioner, and maybe the state director of SSS, where the courts eventually declare an election indescribably rigged. They are culpable.

However, while we acknowledge, with regrets, that Jega's fears are not anywhere near abating, it maybe necessary to ask, could the professor have expected the Nigerian politician to go back and sit in waiting for genuine elections? No way! If the INEC boss does, then Prof. Attahiru Jega does not know politicians.

Also, could the president of the federal republic, who strongly urges - at least verbally - a credible election, be ignorant of police intimidation, in favour of governors or other persons in government, in the states? No again! If Mr. President does not; then Goodluck Jonathan may have wrongly set the course for the craved credible elections.