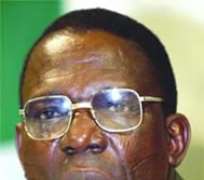 As an elder statesman in Nigerian football, the Super Eagles' former handler called for immediate resolution of the matter to prevent its escalation from hampering the progress of the domestic league.

'This shouldn't have happened if we have a virile and functional marketing and legal department in the Nigeria Premier League in the first place. I am advocating quick resolution of the matter as quickly as possible.

'Today, we talk of due process, so the due process must be followed here according to the stipulations of the terms of the contract. My fear is that if any of the parties involved in this matter should go to court and the court says the league should stop, what are we going to get (benefit) from that?

'So if soccer-loving Nigerians are worried about this situation, I believe it is a genuine worry and the people in position should save the nation from such an embarrassment,' Onigbinde advised.