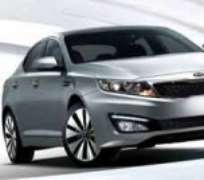 THE all-new 2011 Kia Optima midsize sedan recently received the 'highest possible' crash safety rating of 'Good' in all four tests conducted by the Insurance Institute for Highway Safety (IIHS) in the United States of America (U.S.A).

A press statement said, 'We are honoured that the all-new 2011 Optima has earned the IIHS 'Top Safety Pick', joining five other Kia products and underlining the brand's dedication to the highest levels of vehicle safety and quality'.

Ratings from the Institute are based on results from front, side and rear impact crash tests, as well as a new-for-2010 roof strength test to measure occupant protection in the event of a rollover.

The statement added that each vehicle's overall evaluation was based on various measurements specific to each crash angle and overall impact on crash test dummies inside the vehicle at the time of collision.  All vehicles must offer Electronic Stability Control (ESC) to be eligible.

The 2011 Optima comes equipped with a high level of standard safety features, as is the rest of the Kia line-up.