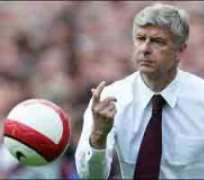 COACH Arsene Wenger of Arsenal has defended his decision to make eight changes to his side's starting line-up after the Gunners drew 2-2 at 10-man Wigan.

Despite a disjointed display, Wenger stressed that he had no option but to rest players who had been involved in their 3-1 win over Chelsea on Boxing Day. He said: 'With all these matches we cannot play with the same team always – but I don't think that was a problem. I don't think it's a shame – overall the draw was all right.'

Arsenal had come from behind to lead 2-1 when Wigan's winger Charles N'Zogbia was sent off for head-butting Jack Wilshere with 12 minutes to go. But Wenger's side was unable to hold on to its lead and was undone by a set piece as the Latics levelled thanks to a headed own-goal by Sebastian Squillaci.

A win would have sent the north Londoners joint top of the Premier League with Manchester United and Manchester City going into the new year. However, the point leaves the Gunners in third place in the table and Wenger bemoaned the fixture schedule, which he felt helped its title rivals.

Wenger, whose side visits Birmingham on New Year's Day before taking on Manchester City at the Emirates on Wednesday, continued: 'It was disappointing because we were 2-1 up, playing against 10 men and dropped two points.

'But overall, it was a difficult game, very physical, with a high level of commitment from Wigan and they caught us a bit at the start. You always felt any mistake at the back and we could pay for it as long as we didn't score the third goal.'

Meanwhile, his opposite, Martinez, stated: 'There's no excuses – that's unacceptable, it's a bad reaction. Charles started the game very well, he won a penalty, he gets kicked in every game and there's a lot of emotions but you cannot accept that sort of reaction.

'He let his team down – football is a team game and the reaction of the players got Charles out of jail in that respect. We'll deal with it internally but it's something I don't like.

'Sometimes in football you need to react in the right manner even if you are getting kicked all over the place. From the first minute, Charles got a rough treatment and you want to protect the skilful players and that protection should come from other areas, not from himself.'

Nevertheless, Martinez insisted that Wenger's decision to make so many changes had not aided Wigan: 'Not at all – looking at them they are all full internationals with really good experience,' the Latics boss explained.

'I would have preferred to play against the team that played against Chelsea and it would have been practically impossible for them to have recovered.'