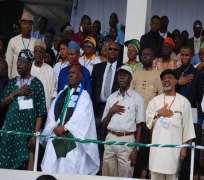 ABUJA, Jan 02, (THEWILL) - The Action Congress of Nigeria (ACN) has expressed serious concern over the rising violence, especially bomb blasts, across Nigeria, saying the federal government's inability to identify and bring perpetrators of previous killings to justice is fuelling the violence.

In a statement issued in Lagos today by its National Publicity Secretary, Alhali Lai Mohammed, the party said a cloud of impunity is hanging over Nigeria, as explosions after explosions occur, leading to needless loss of lives, limbs and property.

It said in the midst of all the violence, the PDP-led federal government seems utterly clueless on how to arrest the situation, forcing many to conclude that Nigeria is fast becoming a failed state.

''We cannot but ask: Is anyone still in charge of Nigeria or have we surrendered the country to anarchists? Is the government still able to meet its first obligation to the people, which is to ensure their welfare and security? For how long can we continue like this, allowing innocent men, women and children to be killed and maimed by end-gamers who are becoming more and more emboldened by the day as the government continues to bumble and waffle?'' ACN queried.

The party recalled its earlier statement in which it said the only panacea to the recurring violence in the country is to smoke out those behind it, no matter their status, and ensure they face the maximum punishment prescribed by the law.

It said Nigerians are sick and tired of hearing the same refrain, 'we shall fish out and bring to justice those behind this', when perpetrators of previous killings have largely gone unpunished.

ACN said the prevailing situation in the country is due to the illegitimacy of the ruling party, the PDP, which has in turn robbed the party of the moral strength needed to tackle the mindless violence, including kidnapping, armed robbery, militancy and bomb blasts, that is ravaging the country.

''Never in the history of Nigeria have the people being subjected to the kind of violence that is reigning supreme under the PDP. It is indeed a double tragedy that a government that cannot even provide for the people is also unable to ensure their security. Having failed woefully, it is time for the PDP-government at all levels to be kicked out through the forthcoming general elections,'' the party said.

It wondered how President Goodluck Jonathan can realize his avowed determination to organize a free and fair election this year, in the midst of unprecedented brigandage and violence that can only be likened to what is happening in Somalia, a classical failed state.

''Only last week, the PDP ward congress in Oyo state was turned into a theatre of war, where people were killed and maimed, as guns, cutlasses, axes and other weapons were wielded freely. It is doubtful whether a party that cannot even organize a violence-free congress can preside over a free, fair and violence free national election,'' ACN said.

It therefore urged President Jonathan to consult other parties outside the PDP as well as individuals and groups to find a way out of the seeming quagmire.