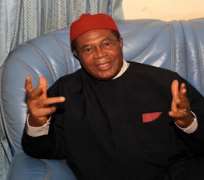 ABUJA, Dec 30, (THEWILL) - The National Chairman of the Peoples Democratic Party (PDP) Dr. Okwesilieze Nwodo today warned officials involved in the on-going electoral process in the party to ensure it conducts its affairs as directed in the party guidelines. Dr. Nwodo said that the NWC frowns at any action either by officials or members that run counter to the guidelines set out by the Party. Nwodo was reacting to issues raised to him by various aggrieved party members especially aspirants alleging lots of irregularities across the country. The National Chairman had on Wednesday announced the dedication of a telephone number 08060095007 to welcome views and complaints from members across the country on the on-going intra-party election processes. Today, barely 24 hours after installing the telephone lines, Dr. Nwodo had read and reacted to over 25 sms text messages on the election across the country. Among the States that the National Chairman received complaints are Plateau, Abia, Bayelsa, Oyo, Anambra and Enugu. Others include Osun, Lagos, Delta, Kwara and Ebonyi. Most of the complaints alleged manipulations by some party leaders to thwart the will of the party members and some deliberate attempts to exclude majority from participating and picking leaders of their choice. Dr. Nwodo also referred some of the issues raised by the complainants to the relevant panels for their attention and necessary action. The National Chairman reiterated his determination to ensure that internal democracy is allowed to prevail in the Party by ensuring that a level playing ground is extended to all aspirants in the Party.