IDIA MASK: NIGERIAN PRESSURE GROUP HALTS OVER N1BN WORTH OF SALES IN U.K. 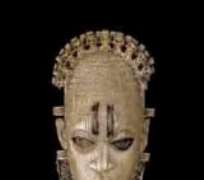 Canceling the sales of six Benin artefacts, including an ivory-made pendant mask of Queen Idia, the London, U.K. branch of the auction house, Sotheby's, may have

considered the legal implication
of accepting to sell lots from the descendants of the man who paved the way for the Benin Expedition in 1897.

LAST week, Sotheby's, in its sales promotion for February 17, 2011, announced sales of six pieces of Benin origin, including a pendant mask of Queen Idia - a major symbol of Benin monarchy. The auction house stated: 'Sotheby's will sell a rare, newly re-discovered, 16th century ivory pendant mask depicting the head of the Queen mother from the Edo peoples, Kingdom of Benin in Nigeria along with five other rare works from Benin collected at the same time.'

In what seemed like an apparent response to the controversy surrounding the sales of these works, the auction house, few days ago, reversed, the situation, saying that 'The Benin Ivory Pendant Mask and other items consigned by the descendants of Lionel Galway, which Sotheby's had announced for auction in February 2011, have been withdrawn from sale at the request of the consignors.'

So far, the only known protest, made officially to Sotheby's, was from Nigeria Liberty Forum (NLF), a non-governmental Nigerian pressure group based in the U.K., In a letter, dated December 23, 2010 and signed by the convener, Kayode Ogundamisi, the group has launched a protest against the planned sales of the artefacts. NLF reminded Sotheby the origin of these works and warned the auction house not to 'assist and or collude in the appropriation and illegal possession of the artefacts.'

The group argued that there was no legal or moral basis for the Galway family to claim ownership of the Benin mask and other items being put on sale. NLF therefore urged Sotheby's 'to withdraw the items from sale forthwith as the true ownership is far from settled.'

Shortly after the letter was sent to Sotheby's, the auction house, through email, was still adamant and explained the legitimacy of selling the 16th century old mask. On behalf of Sotheby's, the Senior Press Officer, Helen Collier, who responded to the question on a possible legal action by NLF, stated that despite the fact that Sotheby's recognises the historical facts behind the acquisition of these works, the sales would go ahead. Under the heading: Sotheby's Statement Regarding Sale Of Benin Mask, Collier argued that 'Sotheby's recognises the difficult issues posed by objects such as this, which are now legitimately privately owned, yet have deep and emotional historical associations with more than one culture / nation.

'We and our clients decided ultimately that introducing the mask into the international art market through a transparent, public auction was a legitimate and appropriate option for this piece.'

Sotheby's may not be new to controversies over ownership of items placed on sales, but the Idia mask and other Benin items appeared to be a hard nut to crack, hence the cancelation. Aside the glaring fact that these works, as stated by Sotheby's, are the originals and dated back to 16th century ago, the holders, Lionel Galway family, according to sources are the descendants of the army officer whose efforts led the looting of the Benin Kingdom in 1897. Late Colonel (Sir) Lionel Henry Gallway (he later changed his surname to Galway) was the Deputy Commissioner and Vice-consul in the then newly created Oil Rivers Protectorate.

Gallway's failure, in March 1892, to convince the King of Benin, Omo n'Oba Ovonramwen to sign what was described as deceptive 'treaty of friendship', led the invasion of Benin, otherwise known as the Benin Expedition of 1897. And the treaty on which the invasion was carried out - though never signed by the Oba - was known as The Galway Treaty.

Although, Sotheby's did not give the reason for the consignors' withdrawal of the items, the fact that they (the Galway family) were the immediate and current beneficiaries of an ancestral theft could legally weigh against the family and Sotheby's.

Noting that these works confirm the Kingdom of Benin's economic and political prowess of past, the sale of the mask alone, Sotheby's said was estimated at  £3.5-4.5m (NI.25b).

NLF may have succeeded in ensuring that the Galway family did not benefit from the sales of these loots, but the battle for repossession should not end there. During a chat on the cancelation, Ogundamisi said the NLF, 'will make every effort to contact the Galway family and see how we can work out the way forward, which is the ultimately return of the artefacts to the Benin people of Edo State.'

And if amicable agreement on returning these works, is impossible with the Galway family, a legal option would not be ruled out, 'until we are satisfied that other Sotheby's, individuals, or any other institution will not be involved in the sale of similarly acquired artefacts,' Ogundamisi assured.

He added that the Galway situation is an opportunity to impress upon the Nigerian government the importance of appropriating the right attention to such issues of national interest.

He also assured that NLF would set up a citizens' committee in the U.K. to monitor further sales of illegally acquired Nigerian artefacts.

Back home, efforts to get the response of the Federal government agency, National Commission for Museums and Monuments (NCMM) failed as SMS, e-mail and phone calls to the Director-General, Usman Abdullah were not replied.

While the ambiguous position of UNESCO's Article 15 of 1970 convention excluded the lootings or any other illegal possession of artefacts supposedly carried out pre-1970 is worrisome, there could be some rattling of this document if a case is established against the Galway family.

Irrespective of what UNESCO is doing or not, African countries, as a development this year suggested, may have taken another step to effect return of stolen artefacts of the continent from museums of Europe and the U.S.

At a two-day conference tagged International Cooperation for the Protection and Repatriation of Cultural Heritage and held in Cairo, Egypt last April, Heads of museums called for a collective approach.

During the Cairo event organized by the country's Supreme Council of Antiquities (SCA), the Secretary General of the host, Dr. Zahi Hawass urged participants to brace up for a near impossible mission. He warned: 'We need to co-operate, we need a unification between our countries. Every country is fighting alone; every country suffered alone, especially Egypt'.

Sources said about 25 countries were represented at the event. Some of these countries are Nigeria, Greece, Bolivia, Italy, China, India, Peru, Libya, Syria and Mexico.