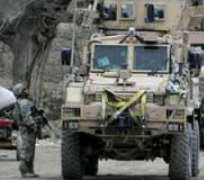 THE North Atlantic Treaty Organisation (NATO)-led force in Afghanistan has rejected Kabul's accusation that foreign forces had violated a security pact by conducting a night raid in the capital in which two guards were killed.

Under the 2008 deal, Afghan authorities have to approve and lead all security operations in the capital. But the Ministry of Interior (MOI) has said that foreign forces ignored the security rules and it was unaware of Friday's operation.

Raids by foreign forces, deeply unpopular among ordinary Afghans, are a source of friction between the NATO force and the government.

The incident is the latest to strain ties, with civilian casualties and accusations that President Hamid Karzai's government is corrupt adding to tension at a time when the West is assessing its long-term involvement.

Confidential United Nations (UN) maps show a clear deterioration in security in parts of Afghanistan over the course of this year, despite White House claims its strategy is working.

The Wall Street Journal yesterday compared two UN maps, one showing the situation at the start of this year's fighting season in March and the other towards its end in October.

While the situation in the south – the fiercest battleground between U.S.-led troops and the Taliban – remained virtually unchanged at 'very high risk', it worsened in 16 districts in the north and east, the paper said.

U.S. President Barack Obama released his review of strategy in the war earlier this month, a year after ordering 30,000 extra troops into battle to prepare for a planned security handover to Afghan forces in 2014.

Obama described the strategy as 'on track' but warned that gains were fragile.

A limited withdrawal of troops is expected to start in July 2011.

There are around 140,000 U.S.-led NATO troops in Afghanistan, two-thirds of whom are from the United States, fighting a nine-year Taliban insurgency.

The Wall Street Journal said the October map had upgraded to 'high risk status' 16 districts in the north and east of Afghanistan which had previously been seen as more secure.

The districts were in the provinces of Badghis, Sari Pul, Balkh, Parwan, Baghlan, Samangan, Faryab, Laghman and Takhar.

The paper added that only two districts previously deemed high risk – one in Kunduz in the north and another in Herat in the west – had received a safer rating in October.

Analysts warn that violence in the north is getting worse despite the Taliban insurgency having its powerbase in the south.

The UN uses the maps to assess the dangers of travelling and running schemes across Afghanistan, the Wall Street Journal said.

Meanwhile, suspected U.S. missiles yesterday struck two vehicles in a Taliban stronghold on Pakistan's side of the border with Afghanistan, killing 18 alleged militants.

The attack in the North Waziristan tribal region came in the final days of a year that has witnessed an unprecedented number of such strikes from drone aircraft flying over Pakistani soil, part of a ramped-up U.S. campaign to take out al-Qaeda and Taliban fighters seeking sanctuary outside Afghanistan.

At least 110 such missile strikes have been launched this year – more than doubling last year's total. Nearly all have landed in North Waziristan, a region that hosts several militant groups battling U.S. and NATO troops in Afghanistan, including the feared Haqqani network.

The six missiles fired, according to Agence France Presse (AFP) yesterday struck the vehicles in the Shera Tala village of North Waziristan. Shera Tala lies in Mir Ali district, where militants are heavily concentrated. The exact identities of the 18 dead were not immediately certain.

The vehicles were apparently leaving a compound, and one was carrying a large load of ammunition, magnifying the blasts from the missile strikes, the intelligence officials said.

The three intelligence officials spoke on condition of anonymity because they were not authorized to speak to media on the record.

Pakistan officially protests the strikes, saying they violate its sovereignty and anger tribesmen whose support it needs to fend off extremists. But Islamabad is widely believed to secretly support the strikes and provide intelligence for at least some of them.

U.S. officials rarely discuss the covert, CIA-run missile program. Privately, however, they say it is a crucial tool and has killed several top militant leaders. They also say the drone-fired strikes are very accurate and usually kill militants.

Information from Pakistan's tribal belt is very hard to verify independently. Access to the area is legally restricted, and ongoing conflict there makes it a dangerous territory to explore.