LITTLE STARS FROM OUR BETHLEHEM 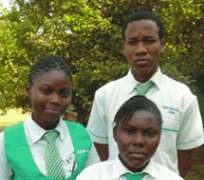 
In time past, if you heard that your son or daughter passed the Cambridge exams (simply known as Cambridge), you picked up your dane gun and went hunting in the bush and brought home a big game or killed one of your cocks and used in celebrating the academic feat.

Well, these young ones whose photographs you are looking at on this page have just passed the Cambridge exams. So how are you going to celebrate their achievement this festive season? What are you going to kill for them? Antelope? Rabbit? Deer? Cow? Cock? Catfish? Goat? Turkey? What gifts are you going to bring to them in this season of joy?

The three whizzkids, Olajumoke Iyiola (age:15), Abidemi Opatola (15) and Dennis Adewoyin (14), from Ezekiel International College, Iju, Lagos, emerged tops in Cambridge examination, otherwise known as International General Certificate of Secondary Education (IGCSE), they sat for in May and, not surprising, their school is over the moon about the feat.

While Iyiola who told Education Review that she wants to be a Chartered Accountant had credit passes in English, Mathematics, Economics, Commerce and Biology, Opatola (who wants to be a gynaecologist, a desire fuelled by what she read and saw in Derek Llewellyn-Jones' Everywoman, at the age of 12, 'I was too young then, it was not really good for my age'), did the same in Mathematics, English, Chemistry, Physics, Biology and Economics, and Adewoyin, who wants to be an Electrical Engineer, after his dad who works with an oil company, did likewise in Mathematics, English, Chemistry and Physics. Talk about sighting a star during Christ's birth, these are the twinkling, twinkling little stars of our own Bethlehem.

Tutorials and preparations
'The school took us through some tutorials,' Iyiola says as she recalls the preparations that went into the making of their success story. 'We had one year intensive training and then revision for two months. We were here throughout the holidays when others were at home. We just stayed till we had our exams.'

Her mention of exams led you into asking what difference she noticed between the Cambridge exams and our local exams here like WASSCE (West African Senior School Certificate Examination) and Senior School Certificate Examination (SSCE) conducted by NECO. For an answer, she scratches the middle of her braided hair a bit delicately with the tip of her index finger as if doing so would help her recollect some details she seemed to have forgotten, before announcing, shyly: 'The Cambridge exams look at something from the practical aspect like what is happening in your environment.

They expect you to use the knowledge you've gained in a particular subject to proffer solution to a given question or problem. I think over here in Nigeria we emphasize too much of the theoretical. While in our own local exams, they would ask you the definition of something, in Cambridge exams, they would give you a kind of case study. From there, you apply the definition or whatever to solve the problem in a very practical way.

'For instance, there is a question in Economics that over here would have required you to give the definition of Economics. But in the Cambridge exams, they gave us a case study and asked us to analyse the definition of Economics from that case study. Take for instance, the term Opportunity Cost. They would tell you that a village built a dam instead of using the money to buy a farm land. Then they would ask you for the opportunity cost and to analyse what the Opportunity Cost means to the villagers. Their paper in English Language is more self-explanatory than what we have here. From the question, you understand what they are asking you to do.' Opatola and Adewoyin said the same thing in separate interviews with Education Review.

'Olajumoke is a girl any parent would love to have. Although quiet and shy, she's sociable and outstanding and never afraid to take up challenges,' Mrs. Adebisi Agboola, the coordinator of the college, remarked. As for Opatola, 'she is 'focused, determined and a go-getter. What she lacks in size, she has in brain' while Adewoyin is 'quiet, homely, hardworking and very neat. He is very sociable but at the same time shy.'

'These three children are geniuses in their own right. They are very brilliant,' the Proprietor of the school, Mr. Adebowale Fasipe, declared with a smile. 'All they need is coordination and direction and that's what we are giving them. One good thing about this result is that they wrote the exams while in SSS (Senior Secondary School) 2. They are going into the final year in the secondary school and we are going to prepare them very well for the Advanced Level which they will be writing next year May when their colleagues will be writing O' Level.'

Geniuses and academic 'gerrymanderers'
Geniuses in their own right? Iyiola, Opatola and Adewoyin really are. Take for instance, Olajumoke Iyiola who, incidentally, is the Head Girl of the school. Of the three, she is, unarguably, the most brilliant. In IGCSE grading, A= 95%; B = 80% and C= 70%. But in the Cambridge exams in question, she scored A* (meaning 100%) in English Language, and A in Mathematics. 'And these are scripts marked in England, not in Nigeria,' Fasipe added with a note of pride.

In Nigeria where massive cheating in exams, whether JAMB (Joint Admissions Matriculation Board), WASSCE (West African Senior School Certificate Examination) or NECO (National Examinations Council), makes it difficult for you to know the dunce from the brilliant, where it has become the order of the day so much that most private schools are now humorously dubbed 'miracle centres' (meaning examination centres where you can turn candidates with three quarters of their brains stuffed with foofoo, eba or Semovita, into high scorers in public exams, thanks to syndicated cheating), this feat achieved by these kids, indeed, calls for celebration. It is time then to celebrate, to pop up the champagne and to clink glasses for an honour well-deserved and Dr. Sid should be on ground to lead the celebration with his sensational 'pour, pour, pour, pour champagne' chant.

Ladies and gentlemen, while you are at it, while you are still holding onto your glasses or drinking to the good health of the celebrants, Mr. Fasipe will like to make one or two comments about this exploit. To start with, although he knew that his students, given their performances over the years (performances which, as he claimed, have seen them being admitted in various universities across the country and which have seen them topping their classes in most of the university departments), he did not believe that his students could make it, could pass the Cambridge exams. So, it came to him as a pleasant surprise when they did not only do so but also surpassed his expectation.

'There's this gentleman who worked in concert with the British Council in Nigeria. He introduced the programme to me about two and a half years ago,' Fasipe says as he recalls how his school's race to success, started. 'But by then I was not ready. I never knew him. He just walked in and mentioned something about Cambridge. I said okay but I am not ready in terms of facilities, in terms of teachers that will take them. I told him point-blank that we are not going to do it. But he kept calling and said from what he saw we can do it.

'Eventually last year October, we took off. Actually, they were five of them but two dropped along the line. They did not do well in the mock tests. Even as we started, I was not convinced that we can deliver. You know, we are talking about something that you are not familiar with, at all. But what baffled me was that when the result came out they all did well. Now, that we know we can do it, we've decided to do it better. These three now are preparing for the Advanced Level while the second set – there are seven of them, are preparing for the O' Level which these three did the other time. With the level of preparation we are putting in place – bringing in the consultant that introduced the programme to us to assess what we do from time to time, to join in the marking of the scripts and to tell us which areas to work on, I think I am convinced that by God's grace we will repeat that feat even at Advanced Level.'

The real miracle centres
If that should happen then it will go a long way in changing the concept of private schools as 'miracle centres.' Or, what do you think?

'Miracle centres?,' Fasipe chuckles. 'It is not possible to turn my school into one even if you are going to pay me N10 million. I don't know of other private schools, but here if anybody wants to challenge the point I am making, let him bring students of the same level and let a neutral body conduct exams for them and let's see who will do better. We've seen that these children are doing well in their O'Level, JAMB and post-JAMB screening. Let me confirm to you that we've produced first class students from public universities in our 13 years of existence. If you call this place a miracle centre then it must be miracle of the kind that we witnessed through the Cambridge exam result, not any other.

'We are talking about something serious here, not sentiments. The truth is that I know a lot of private schools that are doing very well. Of course, we have some bad eggs. But we should be able to differentiate the good from the bad ones. The good ones are doing well and the bad ones know why they are not doing well. So, it is left for parents to either want their children to study hard and pass their exams or to go and pay some money to the miracle centres to pass. The problem with cheating is, you may cheat and get by at a particular level. But there's a level that you will be exposed for who you really are, such as is happening now with the post-JAMB screening.'