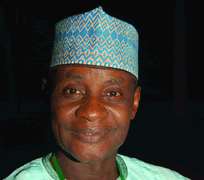 Maigari
Former Super Eagles' coach, Paul Hamilton, has taken a look at Nigerian football as the year comes to an end and concludes that the Nigeria Football Federation (NFF) has to be up and doing to ensure that Nigeria does not again experience the type of setbacks she witnessed in the game in 2010.

Hamilton said the only way out of such a mess was for the Glasshouse to ensure that it gives full support to the national team coaches, especially the Super Eagles and stop killing the coaches' morale with the excuse that there's no money to support their programmes.

He also pleaded with the Alhaji Ibrahim Maigari-led board to resolve the lingering Nigeria Premier League (NPL) election problems amicably without showing any form of favouritism to any party involved, in order to move Nigerian football forward.

'2010 has been an eventful year for Nigerian football. We witnessed many crises, but thank God they have been resolved and we have moved on. However, it is time for the football house to work harder and ensure that we did not witness any ugly event in the year we are about to enter. The NFF has to improve on its reactions and avoid any form of controversy in 2011.

'Our female teams did very well in the outgoing year, quite unlike their male counterparts, especially the Super Eagles. But Nigeria must rewrite that record. All hands must be on deck to revive our football because when you talk about soccer, Nigeria is a force to reckon with in the world.

'Now that Samson Siasia is the new coach of the Super Eagles, he needs all the support from every Nigerian, especially that of our football administrators, to succeed. They should do everything within their reach to avoid complaining about lack of money each time the coach requests for fund to prepare his team for a championship; such excuses usually kill the morale of coaches.

'The NFF also needs to start preparing our girls ahead of the World Cup slated for Germany in June next year. I believe the Super Falcons can win the World Cup if they are given adequate preparation. We have not been able to get it right all these years, not because we don't have the right players that can do the job, but inadequate preparations for competitions have remained out bane.

'Meanwhile, the lingering problem following the NPL election has been given me much concern, because no one makes any progress in the midst of crisis. So, I urge the NFF to resolve that matter with the urgency it requires.

'But in doing that, I advise that they should not allow sentiment to becloud their sense of judgement. Let them not forget that the world is watching our actions,' Hamilton cautioned.