TROUBLE NOT YET OVER FOR UNION BANK 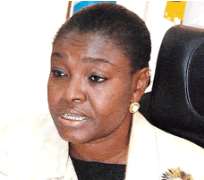 Osibodu
It may not yet be uhuru for the management of Union Bank of Nigeria Plc who defied the court order last weekend to hold its 40th and 41st  Annual General Meeting)(AGM) in Maiduguri, Borno State  amidst the crisis which has engulfed the bank in the recent time.

The union only suspended the action last Monday at the intervention of top management of the Bank. The Unions representing the workers earlier in the week had alert the general pubic at a media briefing of the plan of Funke Osibodu's management led team to destabilise the bank  through its clandestine move to manipulate the outcome of the proposed AGM.

The Union at the briefing held on Monday December 13 had accused the interim management appointed by the Central Bank  of Nigeria (CBN) of tinkering  with the book of the banks and a subtly moves to sell major stake and equity of the bank to their cronnies, African Capital Alliance Limited in the recapitalisation exercise. At the meeting, the unions accused the management of failure to fully address issues which are germaine to the survival of the bank.

Among such, the workers noted is the erosion of shareholders funds in the bank's financial report as at 31st December 2009 thereby presenting  negative position of N238 bn. According to the unions, the various provisions that were made on which recoveries and  reconciliation had been made had not been reversed from the bank's P& L Account. Such are enumerated thus: Provision of N.7 bn for unbalanced books. The position as at 30th November 2010 was N41bn.

Reversal of N11bn realized from Global Fleet.
Provision for Non-performing debts of N84 bn. Various accounts earlier classified as lost on which provision was made are now performing even when they are favoured by the current prudential and guidelines issued by CBN. Recoveries of N100 bn on lost credits had not been accounted for despite the management promise on same.

The workers alleged that management, has continued to apply 2005 salaries with the computation of pension entitlements of retiring employees from June 2010 to date.

Provision of N22.7 bn for CBN RTGSS (settlement account). The union explained that the provision earlier made for N90 bn owed to the bank by the apex bank which had been credited to the Union Bank account with CBN is yet to be reversed. The unions harped that if the aforementioned reversals totaling N372.4 bn were  effected, the bank's negative shareholders' funds put at N238.33 bn will revert to a positive balance of N34.07 bn.

The unions who added further that the workers are equally shareholders holding 35% stake and as such would not fold their arms and watch their investments go down the drain. Other issues that equally forced the workers on mass protest include the failure of the management to disclosed the outcome of NLC allegation to the CBN on the unwholesome practices of the bank management.

The workers lamented 'it is sad to note that, till date, the response on the NLC allegations widely published in the national dailies since 30th August 2010 on which CBN raised an investigation team is yet to see the light of the day. Perhaps this deliberate delay had paved way for more unhealthy corporate governance issues which had continued unabated,' the workers reasoned.

The unions also challenged the decision of the bank management through the board of directors of Union Bank employees share ownernership trust scheme  (UBESOT) and Williams Street Trustees to utilize the proxies as voting rights at the just concluded AGM. The unions expressed their dismay on how the management of the Bank have perfected plans to utilize the share proxies of the Union Bank Employees Ownership Trust Scheme which has always been under the control of the in-house staff unions who hold majority of the Banks employees to vote at the AGM.

The issue of staff promotion which is a motivating factor for enhanced and quality productivity, the unions stated has remained a mirage, while the management had rather embarked on mass sack and re-employing of former staff laid off due to misconduct. The bank's management also received a knock in the area of collective agreement, which the union said the management had no respect for.

'The bank's management had continuously breached the provisions of collective agreements of the in-house unions in the areas like staff Disciplinary Procedure and Recruitment and Transfer,' the unions added. The Secretary General, ASSBIFL Comrade Obukese Orere said that the Managing Director since assumption of office has made it clear that he has no intention of having  any relationship with labour.' The only time she attended to the unions was when the bodies paid a courtesy call on her, subsequent meetings have been rebuffed,' he said.

However, meeting for the suspension of the industrial action was held  on Thursday, December 6, date for the AGM by some representatives of the management, while the MD was away in Maiduguri.

Comrade Orere said the Unions decided to obliged the management having seen some sincerity in their discussion and also in the interest of the customers.

'Most importantly this is Yuletide period and we don't want to send a wrong signal to our customers. All we are doing is in their interest because we know that the bank is still very solid, but for the manipulation,' he said. The ASSBIFI secretary general vowed that the workers would fight with all their strength to ensure that the bank fortunes does not dwindle nor sold out as a bankrupt. He noted that he believed that the management would have corrected all the anomalies pointed out by the unions within the grace of two weeks given at the meeting.

Though the union scribe said he was yet to receive an official statement, he told Workforce that the management as part of re-organising has promoted over 300 staff. 'But that action is questionable because what we gathered is that she promoted the staff in December and post dated the effective date to January 2011.

'In my history in banking, you back date promotion, if any of these people should be sacked now it means they will forfeit the benefits. This is part of insincerity we are accusing this woman of,' Orere said.

Meanwhile the AGM has now become an issue of litigation as two shareholder groups are stoutly opposed its holding and have instructed their lawyers to pray the Federal High Court Lagos for nullification of resolutions adopted at the meeting of the bank last Thursday.

According to the groups' legal counsel, Mr Onyebuhi Aniako, the legal implication of putting the bank on notice is that 'once the respondents are put on notice they should not have gone ahead to convene the AGM.

The lawyer said they would seek for two major reliefs, a nullification of the resolutions of the AGM in Maiduguri and a prayer for court ordered meeting where the management should render accounts  to shareholders from the August 14, 2009 to date, and also shareholders also elect their directors instead of the ones imposed by the CBN.

The Bank's Pensioners Association who also placed on advertorial in the Daily last week on a copy of a petition to the governor of CBN through its solicitors Falana and Falana's Chambers on the Election/Re-election of some Directors of Union Bank of Nigeria at the AGM may also be heading to court.

The pensioners through its lawyers had written the  CBN governor that Professor Musa Yakubu, Messrs Gobir Ibrahim Abdullah and Olusanya Olusegun should not be re-elected as Directors.

According to the pensioners: 'Those three individuals were on the board when the bank collapsed. They were thus involved in the mismanagement of the banks. They added further that 'the total non performing loans for these three directors and their companies for which provisions had been made on the shareholders fund amount to N4,238 billion.