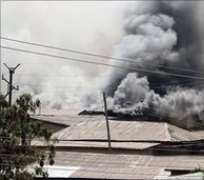 Further violence between armed groups has broken out in the city of Jos in central Nigeria following bombings that killed 32 people.

Witnesses said buildings were set alight and people were seen running for cover as police and soldiers arrived.

Previous violence between Christian and Muslim ethnic groups in the region has killed hundreds.

The latest unrest was triggered by explosions on Christmas Eve in villages near Jos.

Nigerian Vice President Namadi Sambo is reported to be on his way to the area.

Details of the latest violence were unclear,but one witness quoted by Reuters news agency reported dozens of buildings on fire and bloodied people being carried to hospital.

"There were some skirmishes between the two groups and it is under control now," he said.

Mr Sambo's spokesman said that the vice-president was travelling to Jos on Sunday "to make an effort to quell this crisis".

Reports said two bombs exploded near a large market. A third hit a mainly Christian area while the fourth was near a road leading to a mosque. No group has claimed responsibility.

Nigeria's President Goodluck Jonathan has pledged to bring those responsible to justice.

Jos has been blighted by religious violence over the past decade with deadly riots in 2001 and 2008.

The city is in Nigeria's volatile Middle Belt - between the mainly Muslim north and largely Christian south.

The tensions stem from decades of resentment between indigenous groups and settlers from the north.

Correspondents say that although clashes are often blamed on sectarianism, poverty and access to land and other resources are often the root causes.