APRIL 2011: BETWEEN VOTER'S FLIGHT, VOTER'S MIGHT AND VOTER'S RIGHTS 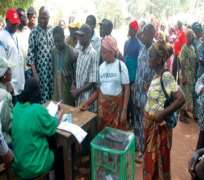 Credible elections feeds the soul of every serious democracy and is a vital indicator of how good or bad the fortunes of a nation will become after its conduct fairly or otherwise.

Elections in widely tropical Nigeria are conducted under the most smouldering of heats, the most whipping of raindrops, and the most poverty characterised of atmospheres.

Previous elections in Nigeria have been adjudged to be far from been credible. And the fate of this promising nation hangs in the balance, now more than ever!

Out of these ramblings and chaos a semblance of sanity and hope is emerging!

The past decades witnessed the detestable gang raping of the fragile economy.

Today, after decades of large scale rape of democracy in Nigeria some sense was infused into the electoral system and positive signs of structural rehabilitation is beginning to emerge.

An unrepentant, tried and tested hard-line patriot and reformist is now manning the affairs of Independent National Electoral Commission, Nigeria’s alpha elections organizing body! He is a well-respected Nigerian citizen whose follower-ship cut across various strata of the society and the geo-polity of our nation.

Almost every concerned citizen is holding his/her breath encouragingly and keeping their fingers crossed enthusiastically hoping to witness a major turning point and revolution in their and the nation’s life come April 2011.

While INEC is working tirelessly towards consolidating its grip on key instruments of structural corrections, political parties and various scheming groups are on the other hand battling it out for space and prominence left, right and centre, a contest that stands on its own as a clear indicator of what is to come, come the d-day!

On its part, Nigerian media has for long proved to be bamboozled by the workings and otherwise of the big and mightiest of Nigerian politics. They are fascinated by and have become obsessed with Nigeria’s elites ability to selfishly engineer the destruction of the whole to safeguard the selfish interest of the few. They have become mesmerised by their ability to design long term political manoeuvrings with military precision, little wonder most front pages of our national dailies are unfairly inundated with such type of accounts and gaffes.

In the shuffle of complex politicking, it’s easy to loose sight of the meagre, yet POWERFUL VOTER!

It is the low-keyed voter living in tents and shanty shelters that holds the true power of dictating what is and what is not to be in a serious democratic arrangement.

Tragically, the voter was made to be distracted from the sordid reality by the power of poverty, confusion and want in which he or she dwells today!

Since independence, the larger part of the Nigerian masses have been forcefully and systematically stripped off of their collective and individual independence and freedom through faceless government policies and calculative political machinations.

They are denied the luxury and right of been free to vote in leaders they deem worthy of leading them to the path of prosperity and opulence. They also are forced to collectively and individually depend on the dynamics of ‘political dictatorship’ for their breads, breath, joys and regrets!

Nigerian masses lacked choice and voice in today’s power dynamics, hence the proliferation of dirty politicians, warts and quacks brandishing themselves as leaders from top to bottom, left, right and centre; powerful men and women in the corridors of power that are tightening their grips on the Nigerian system through greed-driven political machinations.

Indeed, Aristotle was right when he asserted that ‘we are what we repeatedly do. Excellence, then is not an act, but a habit.’

We will unfortunately continue on this path of destruction, until and unless we make a systematic u-turn and vote in credible leadership that can have our interest and the interest of the collective good of the nation at heart in the course of leading the stubbornly blessed nation state. A leader with the tenacity and courage to implement people-oriented and sustainable-development spurring programs and policies.

Of course our unrepentant and merciless political elites are utilizing the power of ‘politics of poverty’ and creation of demand for scarce opportunities to guide and misguide the Nigerian masses. A hungry Nigerian been exposed to extreme economic and social conditions can easily be manipulated into a pre-programmed social mould.

Can we afford to withdraw ourselves, allowing ourselves to be endlessly manipulated and exploited using the politics of sustained dominance to the detriment of our collective hopes and prosperity? I believe answering no to this question is the sure way forward.

It is high time for us to vote out indolence, nonchalance and self-aggrandisement and vote in prudence, accountability, vision, and providence. Let us vote in purposeful leadership from top to down, leadership that have the power to patch our wounds of the past, salvage our present and ensure a proud future for us, our children and grandchildren.

If there is an opportunity to afford to miss, it is not this one. Political blunders? Please, not this time, not in our prime and never at this time of trial.

Lets make the most of April 2011, lets do it, else posterity will judge us painfully!