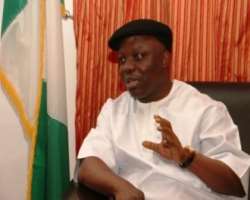 Recall a Court of Appeal in Benin had annulled the 2007 governorship election in the state which INEC had awarded to Dr Emmanuel Eweta Uduaghan of the PDP.

The announcement has heightened political activities in the state.

Those eligible to contest in the rerun are the political parties that fielded candidates in the 2007 poll.

INEC’s Commissioner in Charge of Information and Publicity, Mr. Solomon Soyebi said the date is in line with the directive of the Appeal Court.

“We have decided to conduct the Delta Rerun election on January 6, 2010, “ Soyebi said in Abuja.

Former Governor, Dr Emmanuel Uduaghan (PDP) and Chief Great Ovadje Ogboru (DPP) are expected to be the main contenders. As at press time, THEWILL could not confirm whether Chief Ovie Omo-Agege has been cleared to contest in the election on the platform of the Republican party of Nigeria (RPN).

Omo-Agege’s controversial entry as candidate of the RPN has caused friction between the state chapter of the party and the national secretariat.

Chief Ogboru has also gone to court to challenge his entry.

Both Omo-Agege and Ogboru are from the Urhobo ethnic group of the state.