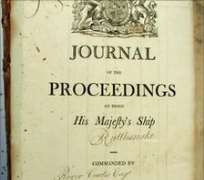 The logs chart Arctic expeditions from the 18th Century

Ships' logs from vessels which travelled in the Arctic Circle in the 18th Century are to be studied to see if they shed light on climate change.

A team from Sunderland University will study records kept by explorers, whalers and merchants during trips which took place up to 260 years ago.

They want to see if the logs provide clues about the ice levels in the area at that time.

They include whaling records kept by a fleet owned by the Newcastle-based Palmer family and Royal Navy logs and data from the Hudson Bay Company.

Ships' logs were used to record the weather while at sea.

Ice advance
The three-year project, funded by the Leverhulme Trust, is being led by Dr Dennis Wheeler in collaboration with the Scott Polar Research Institute.

The study will involve 300 logs which have been collated by the UK Colonial Registers and Royal Navy Logbooks (Corral).

Dr Wheeler said: “We will be looking at climate change, especially the retreat and advance of ice between 1750 and 1850.

“The Arctic environmentally is a hugely important area, but we need to know how it's behaved in the past in order that we can assess how it's going to behave in the future.

“You can't look forward without looking back.
“This is no longer just a scientific issue – climate change is of global, political concern.”