WILL THE CHANCELLOR REGRET CREATING THE BANKING COMMISSION? 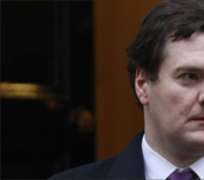 One of the bigger stories next year will be the recommendations of the Banking Commission set up by the chancellor on how to increase the safety of our banks and enhance competition between them.

What is increasingly clear to me is that this could cause something of a political car crash, in that there is no chance that the commission will say that the status quo is acceptable. Of the five members of the commission, not one believes that the way banking in the UK is organised today is either sensible or sustainable.

Mr Osborne leaving a cabinet meeting, 21 December
That means the chancellor is likely to be presented with proposals which will be hated by much of the City and by an influential contingent of his own party. The Commission's recommendations – due to be put forward in preliminary form in April – may well therefore precipitate something of a war both between the banks and government and within the government.

None of which is to say that I know precisely what the commission will propose. It is too early in the process to be sure of that. But the members' identification of the problems tells you that what they'll eventually say cannot be anodyne.

First and foremost, they believe that it is profoundly unhealthy for the UK to have banks which insist on the freedom to operate how they like (including paying whatever bonuses they like) and yet could not carry on in business without implicit or explicit financial support from taxpayers on a colossal scale.

So one challenge for the commission is to come up with a structural reform that would make banks, bankers, their shareholders and creditors completely liable for the business mistakes of banks' managements, without putting at risk either the savings of retail depositors or the integrity of the payments and credit-creation systems.

That will mean forcing banks to hold substantially more capital – tens of billions of pounds more – to absorb potential losses. This will be neither cheap nor easy for the banks to raise (and may take the form of debt that automatically converts into equity capital in certain circumstances).

And it will also mean – subject to agreement in the EU (which won't be simple to obtain) – some kind of credible separation of retail banking and the money-transmission mechanism from banks' more speculative activities (which could mean splitting banks or putting in place robust firewalls and barriers within banks so that savers' money can't be tainted by investment banking).

What I think the commission wishes to build is a new structure for the banking industry in which it is perfectly clear that the investment banking parts of Barclays and Royal Bank of Scotland, for example, won't in any circumstances be rescued by taxpayers – so that if they get into trouble, all the pain of that trouble falls on commercial investors and creditors.

The onus for Barclays and Royal Bank in those circumstances would be to prove that their investment banks are viable, profitable businesses. Which they will not find easy. Because right now those banks are able to borrow at cheaper rates, since creditors know that they'll be bailed out by taxpayers if the banks get into difficulties (see my earlier post How to curb bonuses for more on this).

Funnily enough, proposals to enhance competition between banks could also make it easier to ring-fence the bits of banks that can't be allowed to fail because of the consequential damage to the economy.

The main obstacles to effective competition are the inertia of consumers – our reluctance to switch banks – and the difficulty for new banks and smaller banks in obtaining access to essential financial infrastructure, such as the money-transmission or payments system.

If the money-transmission system were regarded as a utility, a bit like the national grid in energy, then it could be regulated both to preserve its integrity and to make sure that smaller banks were allowed to use it at a price that permitted them to generate a decent return.

This could involve forcing the big banks to de-merge the vital payments infrastructure into standalone, service utilities – which in theory could have benefits both for competition and in ensuring that when a bank got into trouble there would not be a serious risk to wider commerce.

What it will all boil down to for the Banking Commission is this: how to let bankers who want to be entrepreneurial do their stuff, without having the comfort of knowing that if it all goes wrong for them, we as taxpayers will pick up the bill. It won't be easy or uncontroversial.