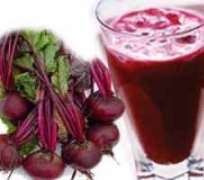 THE burning questions in so many minds as Nigerians go on a long holiday for Christmas are; what to eat, and what not to eat? But recent scientific findings might have provided the answers.

A new study published in the Journal of Applied Physiology has shown that drinking a glass of beetroot juice daily could help beat not just high blood pressure, but has two marked physiological effects.

Secondly, it affects muscle tissue, reducing the amount of oxygen needed by muscles during activity. The combined effects have a significant impact on performing physical tasks, whether it involves low-intensity or high-intensity effort.

Earlier report published in the medical journal of the American Heart Association: Hypertension suggests that drinking half a litre - just under a pint - led to dramatically lower readings.

The effect was linked to the nitrate in the beetroot that, the researchers suggest, 'reacted with bacteria in the mouth… which resulted in blood vessels dilating to increase blood flow.'

The study is based on a study conducted in healthy volunteers that looked at the short-term effect of beetroot juice on blood pressure.

The volunteers who drank the beetroot juice had a drop in blood pressure between two-and-a-half and three hours after drinking. If this research can be replicated with other vegetables and in people with high blood pressure, this would further confirm the benefits of a healthy, vegetable-rich diet.

Indeed, the new research into the health benefits of beetroot juice suggests it is not only athletes who can benefit from its performance enhancing properties - its physiological effects could help the elderly or people with heart or lung-conditions enjoy more active lives.

Beetroot juice has been one of the biggest stories in sports science over the past year after researchers at the University of Exeter, United States found it enables people to exercise for up to 16 per cent longer.

The startling results have led to a host of athletes - from Premiership footballers to professional cyclists - looking into its potential uses.

The new piece of research by the university in conjunction with the Peninsula College of Medicine and Dentistry, United States, has revealed the physiological effects of drinking beetroot juice could help a much wider range of people.

In the latest study, published in the Journal of Applied Physiology, the researchers looked at low intensity exercise and found that test subjects used less oxygen while walking - effectively reducing the effort it took to walk by 12 per cent.

Beetroot juice contains high levels of nitrate. The latest study has proved that this is the key ingredient, which causes the increase in performance, rather than any other component of the beetroot juice.

Another new study suggests that consuming an almond-enriched diet may help improve insulin sensitivity and decrease Low Density Lipo-protein (LDL)- 'bad' cholesterol levels in those with pre-diabetes, a condition that is the precursor to type 2 diabetes.

The findings of a scientific study examining the health promotion and disease prevention benefits of almond consumption were published in the June 2010 Journal of the American College of Nutrition.

The study looked at the effects of consuming an almond-enriched diet on factors linked to the progression of type 2 diabetes and cardiovascular disease in adults with prediabetes.

After 16 weeks of consuming either an almond-enriched or regular diet, both in accordance with American Diabetes Association (ADA) recommendations, the group that consumed an almond-enriched diet showed significantly improved LDL-cholesterol levels and measures of insulin sensitivity, risk factors for heart disease and type 2 diabetes.

A caveat is that although study participants in both groups were instructed to consume the same amount of calories from carbohydrates, there was less self-reported carbohydrate intake among those in the almond group.

In another study, researchers at King's College London and the University of East Anglia have discovered that women who consume a diet high in allium vegetables, such as garlic, onions and leeks, have lower levels of hip osteoarthritis.

The findings, published in the BMC Musculoskeletal Disorders journal, not only highlight the possible effects of diet in protecting against osteoarthritis, but also show the potential for using compounds found in garlic to develop treatments for the condition.

A relationship between body weight and osteoarthritis was previously recognised, although it is not yet completely understood.

This study is the first of its kind to delve deeper into the dietary patterns and influences that could impact on development and prevention of the condition.

Osteoarthritis is the most common form of arthritis in adults, and women are more likely to develop it than men. It causes pain and disability by affecting the hip, knees and spine in the middle-aged and elderly population.

Currently there is no effective treatment other than pain relief and, ultimately, joint replacement. The study, funded by Arthritis Research UK, the Wellcome Trust and Dunhill Medical Trust, looked at over 1,000 healthy female twins, many of whom had no symptoms of arthritis.

The team carried out a detailed assessment of the diet patterns of the twins and analysed these alongside x-ray images, which captured the extent of early osteoarthritis in the participants' hips, knees and spine.

They found that in those who consumed a healthy diet with a high intake of fruit and vegetables, particularly alliums such as garlic, there was less evidence of early osteoarthritis in the hip joint.

To investigate the potential protective effect of alliums further, researchers studied the compounds found in garlic.

They found that that a compound called diallyl disulphide limits the amount of cartilage-damaging enzymes when introduced to a human cartilage cell-line in the laboratory.

According to a large epidemiological study, a diet rich in vegetable protein, but not animal protein, could prevent hypertension and related diseases.

The five-a-day diet has been the advice of the World Health Organisation (WHO) since 1991 after a series of studies consistently showed that a diet rich in fruit and vegetables resulted in lower incidences of heart disease and some cancers.

Lead author, Professor Paul Elliot from Imperial College London, wrote: 'Our results are consistent with current recommendations that a diet high in vegetable products be part of a healthy lifestyle for prevention of high blood pressure and related chronic diseases.'

Scientists have, however, provided explanation for vegetables role in lowering blood pressure. They say nitrates, a chemical found in vegetables like spinach and lettuce, may be responsible for keeping blood vessels healthy.

Scientists at the Swedish School of Sport and Health Sciences examined the effects of short-term nitrate supplementation in a group of 17 healthy, non-smoking young adults.

Each participant rotated between taking a daily dose of nitrate supplement equivalent to the amount normally found in 150 to 250 gm of a nitrate-rich vegetable — such as spinach, lettuce, or beetroot — for three days, and taking a placebo for a different three days.

The results showed that average diastolic blood pressure was lower after three days of nitrate supplementation than it was after taking the placebo for three days.

The researchers claimed to have found nitrates in vegetables like spinach and lettuce, which they say may be Mother Nature's way of keeping blood pressure in check.