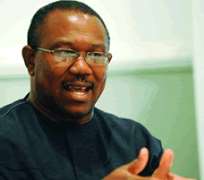 Governor Peter Obi of Anambra State, yesterday, presented a proposed 2011 budget of N66.676 billion to the state House of Assembly. The budget tagged, 'The Peoples Budget of Integrated Development IV,' represents a reduction of 1.66 per cent over 2010 budget of N67.786 billion.

Presenting the budget at the floor of the Assembly, Obi who said it was programmed to be balanced with total expenditure equaling total receipts, stated that Anambra Integrated Development Strategy (ANIDS) remained the pivot on which the administration revolved.

The governor said the government would, among other things, sustain the provision of the socio-economic amenities and infrastructure needed for the development of all sectors, particularly roads, health, education, agriculture, water supply and housing as well as continue to effect the prompt payment of salaries and allowances of civil servants and pensions.

Government, he further said, would reach out to more development partners and sustain the good relationship between the state and the existing partners and encourage wider public-private partnership in the development efforts for which a bill was already in the making.  He stated that government would also continue to explore alternative strategies for effectively increasing the state's internally generated revenue, explore and adopt measures needed for the maintenance of security of lives and property.

A breakdown of the proposed budget showed a projected revenue earning of N40 billion, which would have Internally Generated Revenue (IGR) yielding N12 billion and the state's share of the federation account brining in N28 billion.

Further breakdown of the budget showed that the economic sector received the highest allocation of N16.446 billion, followed by environmental sector with N6.592 billion, general administration with N5.961 billion and social sector with N4.692 billion.

Under economic sector, land transport (roads and bridges) got the highest allocation of N10.940 billion while housing development followed with N2.451 billion, finance and investment, N2.046 billion, education N2.040 billion, among others.

Governor Obi thanked the House for the conducive environment it created, which, according to him, made the developmental achievements of the administration in the state possible and asked them to treat the budget as usual with the speed it required and give it a 'brotherly and sisterly' touch.

Receiving the budget proposal, the Speaker, Chief Anayo Nebe commended the governor for his remarkable achievements and assured him that the budget would receive accelerated consideration and the legislators' resolve to give him all necessary support to sustain enduring peace and enabling environment for the development of the state.

The first reading of the budget proposal was done in the presence of the governor in line with the Assembly's resolution to give it accelerated consideration for quick passage.

After the reading, the Speaker referred it to the House Committee on Finance and Appropriation and gave it one week to report to the House, assuring that all necessary logistics would be made available for them to deliver on time.