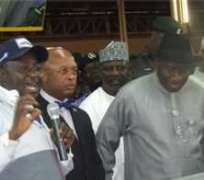 Jonathan
Two pro-Jonathan groups yesterday in Abuja called on former president Ibrahim Babangida, former vice president Atiku Abubakar, Governor Bukola Saraki and all members of the Northern Political Leaders Forum (NPLF) led by Mallam Adamu Ciroma to seek their political fortunes elsewhere if they are not comfortable with the position of the National Working Committee (NWC) of the Peoples Democratic Party (PDP) allowing President Goodluck Jonathan to contest election in 2011.

Specifically, the groups- Congress for Equality and Change and South-South Leaders led by erstwhile information minister and Ijaw chieftain, Chief Edwin Clark, said rather than fanning the embers of war out of frustration over imminent defeat at the polls by going to court to stop the political aspiration of President Jonathan, members of the NPF should toe the path of honour and seek their political fortunes elsewhere.

In the suit, the plaintiffs who are active members of the party are asking the court to restrain PDP and its National Chairman, Chief Okwesilieze Nwodo from presenting President Jonathan as their candidate for the said election.

But rising from a joint emergency meeting in Abuja, the pro-Jonathan groups accused members of the NPLF of reneging in an earlier agreement reached between them on Thursday, September 16, to allow all presidential aspirants within the PDP to pursue their aspirations without let or hindrance.

In a communiquÃ© at the end of the meeting, the groups noted that 'while the South-south leaders and Elders Forum kept faith with this gentleman agreement, the Northern Political Forum surprisingly turned around to appoint a nine-man committee to select a consensus candidate from the North for the PDP primaries against the President Jonathan/Sambo ticket.

'Not satisfied, they further went ahead to insist on stopping President Jonathan through the PDP National Working Committee with a petition and also instituted a suit to the same effect at the law courts, all to no avail.

'Still not satisfied, they are back in court again on the same subject matter for an agenda yet to be disclosed to Nigerians.

'We advise all those who are uncomfortable with the political developments in the PDP, especially with regard to the 2011 presidency to toe the path of honour and seek their political fortunes elsewhere rather than fan the embers of war out of the frustration of imminent defeat.'

In the suit in reference, the plaintiffs are contenting that whether having regard to the provisions of Sections 14 (3) and 233 (2) (b) of the Constitution of the Federal Republic of Nigeria 1999, Section 87(9) and (10) of the Electoral Act 2010 and Articles 2 and 7.2(c) of the Constitution of the PDP, 2009 (As amended) and the resolution of the national caucus of the party reached on December 2, 2002, Jonathan not being from the Northern Geographical Zone could contest for the 2011 presidential election on the platform of the party.

The court is further called upon by the plaintiffs to determine whether given the said statutory provisions, the PDP can allow any other candidate to be nominated and presented as its candidate for the 2011 presidential elections other than a candidate from the Northern Geographical Zone as stipulated in the said national caucus of the party's resolution reached on December 2, 2002.

Furthermore, the court is to decide whether going by the above provisions of the statutes, INEC is not bound to reject any candidate presented by the PDP in contravention of and total disregard to the provisions of Article 7.2(c) of the party's constitution.

They want the court to declare that by virtue of the provisions of sections 14(3) and 223(2)(b) of the 1999 constitution, section 87(9) and (10) of the Electoral Act 2010 and Articles 2and 7.2 (c) of PDP's constitution and the resolution of the National Caucus of the party reached on December 2, 2002, President Jonathan, not being a northerner cannot contest the 2011 presidential election on PDP's platform.

They equally want the court to declare that PDP is bound to allow a candidate from teh Northern geo-political zone to contest for presidency in 2011 presidential election so as to complete the Zone's eight years slot in producing candidate for the election into the office of the president, adding that the National Working Committee of the party cannot by its decision override the resolution of the National Caucus which is a superior organ to it, in the party's hierarchy.

In a 35-paragraph affidavit in support of the Plaintiff's amended charge and deposed to by one of the Plaintiffs, Hon Dubem Onyia, the Plaintiffs averred that late President Yar'adua, from the North West geopolitical zone became president in May 2007 on the platform of the PDP, pursuant to binding zoning arrangement of the PDP which is consistent with the federal character policy entrenched in sections 14(3) and 223(2)(b) of the constitution.

According to the affidavit, late Yar'adua who's death led to Jonathan's emergence as President was entitled to eight years tenure of two terms of four years each, which was the Northern slot before his demise in May 6, 2010, pointing also that the second four year term for a northern candidate is by virtue of the 2002 resolution of the party and the federal character principle entrenched in the constitution.

It further averred that any attempt by President Jonathan to contest the position of the president under the platform of the PDP will make nonsense of the federal character principle, noting also that the president is using the power of incumbency to subdue and influence party leaders to upturn the resolution reached by the party on December 2, 2002.

President Jonathan's interest to contest, they note will disrupt the zoning agreement of the party since he has all the state's resources at his beck and call to impede the chances of northern candidates, saying that the interest of the Plaintiffs is seeing that the party uphold the provisions of the constitution