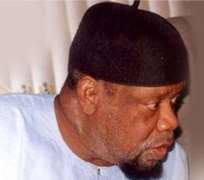 Ikemba Nnewi, Chukwuemeka Odumegwu-Ojukwu, who is down with Cerebral Vascular Accident (stroke), was on Thursday flown to the United Kingdom on board a German air ambulance for further treatment.

The national leader of the All Progressives Grand Alliance was taken to the Akanu Ibiam International Airport, Enugu at 11.10 am in one of the three state of the art ambulances provided by the Anambra and Enugu state governments.

The ambulances, which were followed by other vehicles drove into the airport through the Air Force wing , apparently to avoid the prying eyes of anxious passers-by, sympathisers and journalists.

Odumegwu-Ojukwu's wife, Bianca; the National Chairman of APGA , Chief Victor Umeh; the Anambra State Commissioner for Health, Prof. Linus Ilika; the leader of the Movement for the Survival of Sovereign State of Biafra, Chief Ralph Uwazurike; Prof. Augustine Nwabueze; Prof. Vincent Ike; Dr. C.C. Amah; and Dr. Paul Ufoegbunam, were in the convoy of vehicles that followed the ambulances.

Others were the children of the elder statesman, some of whom flew into the country from the United States and the UK. The convoy was received by the commander of the Airforce Wing, Air Commodore Jacob Gbamwuaw, and the Commander of the Flying School, A.B. Esuara.

The air ambulance marked D-CSIX arrived at the airport at about 11.30am and departed around 1. 52pm for the UK.

Before the convoy arrived, Anambra State Governor, Mr. Peter Obi, had visited the airport where he conferred with the air ambulance crew.

Obi, who looked pensive, thanked Nigerians for their concern. He specifically mentioned President Goodluck Jonathan, whom he said called him on a daily basis to find out about the condition of the elder statesman.

Expressing confidence that Odumegwu-Ojukwu would return to Nigeria in good health, the governor enjoined Nigerians to continue to pray for him.

Asked what the ex-Biafran warlord's ill-health was costing the state, Obi replied, “Who cares what it costs the state than our beloved father getting well?”

Umeh had earlier on Thursday visited UNTH where he coordinated the movement of the Ikemba to the airport .

“Dim (Odumegwu-Ojukwu's other title) is being moved abroad for further treatment. We do not want interference in the movement,” the News Agency of Nigeria quoted him as saying.

Umeh, who appeared agitated while chasing away journalists, officials of UNTH and other people, who trooped out to see what was happening, repeatedly said, “We are flying him abroad.''

Odumegwu-Ojukwu was rushed to the Accident and Emergency Unit of the UNTH on Sunday morning but was later moved to the ICU in the afternoon after he was diagnosed with Cerebral Vascular Accident.

CVA, according to seniorhealth.about.com, is “another name for a stroke. It is damage to the brain caused by a disruption of the blood supply to a part of the brain.

“This disruption of blood supply can be caused by a blood clot, or by a ruptured artery.

The website also states that “symptoms of a CVA depend on which part of the brain is affected. Common symptoms may include paralysis of a part of the body, loss of all or part of the vision, or loss of the ability to speak or to understand speech.”

He began his educational career in Lagos.

At 13, his father sent him to the UK to study at Epsom College, England. He left Epsom at 18 for Lincoln College, Oxford.

At 11, Odumegwu-Ojukwu was briefly imprisoned for assaulting a white British colonial teacher, who was humiliating a black woman at King's College, Lagos. The incident generated widespread coverage in local newspapers.

The ex-Biafran warlord joined the civil service in Eastern Nigeria as an Administrative Officer for Udi District in Enugu State on his return to the country in 1956.

In 1957, within months of working with the colonial civil service, he left and joined the military as one of the first and few university graduates to join the army as a recruit.

Odumegwu-Ojukwu rose to the rank of a Lt.-Col. in the Nigerian Army, before he was appointed the Military Governor of the then Eastern Region by the regime of the late Maj.-Gen. Johnson Aguyi-Ironsi.

He proclaimed the former Eastern Region as the Peoples Republic of Biafra on May 30, 1967 and became its Head of State and Commander-in-Chief. His action led to the outbreak of the Nigerian civil war the same year. Arrives in convoy of 3 Ambulances Being moved into air ambulance Takes off to UK