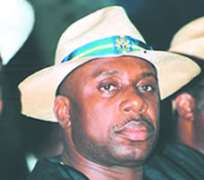 As battle for the 2011 gubernatorial elections hot up, Rivers State Governor, Chibuike Rotimi Amaechi, yesterday inaugurated a 10-man campaign team with the charge to organize for his declaration and work towards winning the party primaries.

The campaign office will be formally opened today.

Speaking during the inauguration, Governor Amaechi charged the team to work hard in order to achieve success. He reminded the team of the robust task placed before them and urged them to brace up for the challenges. He also urged them not to indulge in any campaign of calumny against other guber- aspirants in the state but should rather concentrate on a value -led campaign.

Amaechi said: 'Let me congratulate you for having been appointed in the campaign team. I hope you know that it is a difficult task to satisfy first, all the members of the party and the state. So, you really have to work hard. We must not abuse or insult other aspirants, whether in our party or outside our party. We must try to set the agenda and the agenda should be value- led. The first assignment you have if possible is to organize for declaration, if it is not possible whatever you come up with we will go with you. The next thing you should look at is the primary, because it's very pivotal. If we lose primary then the office is shut and we will not continue with the campaign'.

'What should determine what you say should not be insults, it should be programmes of development and how to change the face of Rivers State,'he said.

'We need to work on not just the change agenda or the reform agenda, so that we will at the end of the day enjoin all those who may have lost at the elections to join us in changing the state because by God's grace I expect that we will win.'

Responding, the director general of the Amaechi Campaign Organization 2011, assured the governor of the team's preparedness to deliver, promising that the campaign would be issues based.

Chief Wike also expressed confidence in the team and appealed to the governor to give the team the needed support to champion the course. 'On behalf of the campaign team I want to thank His Excellency for having the confidence to appoint us to lead the campaign for your re-election come 2011.Like you said, the campaign will be issue based and not on dirty and irrelevant things. Be rest assured that we will do all that we can and God being with us we shall deliver,' he said.