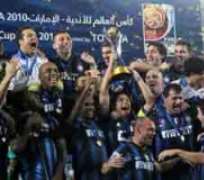 SO indifferent was FC Internazionale Milano's form going into the FIFA Club World Cup UAE 2010 that many people had SC Internacional do Porto Alegre down as their favourite to win the competition.

Led by the inspirational Samuel Eto'o, however, the Nerazzurri defied the doubters, comfortably seeing off Seongnam Ilhwa Chunma FC in the semi-finals before dispatching African hopeful, TP Mazembe, by the same 3-0 scoreline in weekend's final.

In rediscovering the spirit that took it to the European title earlier this year and in emulating the feat of its city rival, AC Milan, which lifted the trophy in 2007, the Italian club collected a third club world championship trophy to add to the two it won in the mid-1960s. It was the perfect tonic following a trying start to the season.

After his outstanding display in the final, Eto'o was a deserving winner of the Adidas Golden Ball. The Camerounian livewire set up strike partner Goran Pandev for Inter's opening goal against the Congolese, and then struck with a superb drive, with Jonathan Biabiany rounding off the scoring five minutes from time.

Despite its defeat, African champion, T.P. Mazembe, had every reason to be pleased with its competition. Lamine N'Diaye's side pulled off the shock of the tournament when they became the first African side to reach a FIFA Club World Cup final, goals from Mulota Kabangu and Dioko Kaluyituka helping them to oust Copa Libertadores holder, Sport Club Internacional, in the semis.

As expected, the Congolese side brought alongside its colourful and noisy band of supporters, with Sport Club Internacional's fans also making selves heard during weekend's match for third place against Seongnam Ilhwa FC.

Belatedly reproducing the form that took it to them Copa Libertadores title earlier this year, the Brazilians salvaged some pride with a 4-2 win, which provided the perfect send-off for their Argentine goalkeeper Roberto Abbondanzieri, who came on as a second-half substitute in what was the final appearance of his professional career.

The man of that particular match was Alecsandro, who scored two of O Colorado's four goals and set up Tinga for another. Andres D'Alessandro capped another industrious display by scoring their other goal. The South Koreans were indebted to another in-form South American, Colombian striker Mauricio Molina, for their two goals.

Also on the scoresheet in the 4-1 quarter-final win over Al Wahda – a game in which he also provided two assists – Molina ended the tournament as leading goalscorer.

The Asian champion's hopes of reaching the final were dashed by the ruthless FC Internazionale Milano in the semis. Driven forward by the tireless Javier Zanetti, the Italians made light of Wesley Sneijder's early injury to run out easy 3-0 winners, though the South Koreans can take pride from emulating compatriots Pohang Steelers, who also reached the last four 12 months ago.

Having appeared in the competition twice before, Club de Futbol Pachuca was expecting to make an impact, but had to be content with fifth place after losing to T.P. Mazembe in the quarters. The Mexicans rounded off with a penalty shootout win over home side, Al Wahda, which was at least able to improve on the seventh place attained by fellow country club, Al Ahli FC, in 2009.

Oceania champion, Hekari United FC, which lost 0-3 to the Emirati side in the play-off for the quarter-finals, can take pride from its achievement in reaching the tournament, the last to be held in Abu Dhabi before its return to Japan next year.

Overall, the Club World Cup UAE 2010 proved to be a great success, as FIFA President, Joseph S. Blatter, noted afterwards: 'The United Arab Emirates have set the bar very high,' as thoughts began to turn to the next meeting of the world's continental champions in the Far East next year.