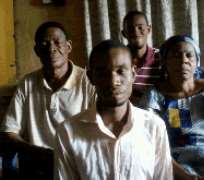 Many do not believe in superstition or that curses have efficacy. It also has no legal or scientific backing or proof. But this story of three siblings – Chukwuka Samuel Ikeji, Amaka Catherine Ikeji and Emeka Ikeji who were born blind elicits a re-think and calls for deep consternation.

The story around their blindness is that before they were born, their mother had an encounter with a woman who alleged that their mother mocked her because her husband was blind and uttered a curse that the woman would reap the reward of having blind children to feel the impact of the problem.

The incident took place 34 years ago, and all entreaties to appease her after the first child from the woman she cursed became blind failed. The situation remained so until the family packed out of the landlady's house. But like an airborne disease that observes no barriers, even the two children the woman had after relocating still picked blindness and live with the problem till date.

They grew up to be told of the circumstances behind their blindness from birth. But, despite the mystery, they are not discouraged. Rather, they are focused with their talent in music. They formed a musical group called 'Voice of Truth Gospel Band', with one other blind friend, Temidayo.

Saturday Sun spotted them recently while they performed in a church event and engaged them in a chat. Their musical group was formed out of a desire to raise money to sustain their family, pursue a meaningful living and get education.

Exceptional story
Chukwuka, the leader of the group recalled that his mother told him she discovered that he was blind after three months. 'It was just after three months that my parents discovered that I was born blind. So, they took me to primary school for the blind. There, I met many other blind children, and that gave me courage that people with disability can do something. Today, I am a graduate of Kings College Lagos, and still working hard to further my education to study Mass Communication. By the grace of God, I would like to be a journalist', he assured.

Amaka bared it all out. She claimed that her predicament and that of her two brothers could be traced to the curse placed on them by their former landlady via their mother before they were born.

'My mother had misunderstanding with her landlady before we were born. The story I heard from her is that the landlady accused my mother of abusing her blind husband. And in reply, she declared to her in retaliation that she has placed a curse of having blind children on her. Indeed, the words came true just the way she declared.

But to the glory of God we are not totally blind. We are partially blind. Though we are counted as visually impaired people. We have gone to various hospitals, churches, healing places, with the exception of herbalists, and yet no solution. We went to the Kano eye hospital. But my dad said we shouldn't undergo surgery because it might get worse after. We decided to leave it the way God made it. So I went to primary school blind finished from there and went to Federal Government College, Ijanikin. And after then I actually got a little job to keep me busy at the office of the Nigerian Association for the Blind.'

Emeka Ikeji, the drummer in the group has as well resigned to the fate of blindness that lives with him. He is a student of the College of Education, Oyo where he reads English. 'When I discovered that I had ended up in a school for the blind, I had no choice but to learn to live with it. I was in primary school and developed interest in the drums. I see a little but not very well. Music makes life a lot easier and I believe that if God wishes. He will break the curse and restore our sight completely some day.'

The three blind siblings have a fourth partner in their band, who shares same predicament. Her name is Temidayo whose parents discovered that she became blind not from birth but after a childhood illness. 'I was attending Vivian Nursery School when I discovered that I was blind. My parents didn't discover the kind of ailment that afflicted me then. Much later they discovered that it was measles. By then it had already affected my sight. No attempt to correct the problem through surgery or any other expert attention yielded any positive result. The advice was that no surgery should be tried on my eyes in Nigeria due to the nature. People suggested a lot of things to discourage my parents.

And in addition, my dad was not so buoyant to handle the bill. So I have no alternative but to live with the problem, and just putting in my best to ensure it is not a disability to my aspirations. When they discovered the school for the blind, I was sent there. From there I moved to Queens College. So I have been thinking of furthering my education. I want to study Mass Communication.'

The group said their greatest challenge is mobility. 'The challenge we face is mobility. For now we don't have a vehicle for our band so we still face embarrassments. Most of our reckless drivers are not concerned that some people are specially challenged and need to be taken care of. So they drive anyhow. We get scared that they will knock us down. Sometimes if we try to reach people for assistance, they avoid us. Sometimes it is hard to find people who accord us assistance to cross roads or board a bus.

'Some people even get scared of us. When you want to talk to somebody on the bus, they snub. The other day I wanted to make use of the ATM machine but perceived somebody was there. When I asked her to help me withdraw money, I noticed she sneaked out leaving me there talking to myself,' Chukwuka soberly complained'

The solution to the problem according to Amaka that the government should make it a policy to appoint qualified challenged persons to public positions.

'Even if they are not made governors or the president, at least a minister or a member in the National Assembly will be okay. They should come close to us so we can rub mind. There are many of us that are well educated.'

Citing an example of some of the setbacks, Temidayo said: 'A certain blind boy was admitted in a school, but at the time of examinations he applied to the school administrator for special invigilation so that someone could help him read out the questions so he can answer. I am sure the school had no Brail facility for him. At the end of the day the school couldn't arrange for somebody to help. He was asked to hang on until a time they got somebody to do that. At last the school asked him to leave because it can't afford the facility to handle his education.'

Possible cure
The three siblings reiterated their decision to forgive the woman who they were told was the cause of their predicament. But in addition Chukwuka declared that he is no longer interested in making any other effort to regain his sight.

'I am okay the way I am. I know that I can do what anybody does. I read and write brail. I cook. I go to the market myself. I am not interested in any surgery unless it turns out to be a miracle. I have received all kinds of medicated eyeglasses, which ended up breaking at the end of the day. Doctors have even confirmed that my eyes cannot be corrected with glasses.'

Amaka is willing to give it another try if she can get sponsors. Her only fear is where to find a reliable doctor that would not damage her sight completely. 'If it is God's will I don't mind. I believe He will send helpers my way if I am to undergo surgery. Operation is by luck. We have heard cases of people who lost their sight after surgery. But if God wants it to work that way, I don't mind. It would be a miracle to regain my sight completely.'

Although she is scared to leave her eyes at the mercy of a doctor, Temitope wouldn't mind giving it a try. 'Some how I have resigned to my fate because people keep discouraging my parents not to allow me to go for surgery. However, if the opportunity comes I don't mind and God willing I could regain my sight. I have missed a lot in this state.'

Wedding bells
Amaka was the first to be asked whether there were plans to walk the aisle with her dream man? She said: 'I am still looking up to God for one. I believe God for miracles. Even as a blind lady I want God to bring the one He has kept for me. If it is a blind person that has a bright future, I don't mind. He should be educated and God fearing and if it is a sighted one that is a bonus. There are also blind people who can cheat more than those that are sighted.

Recalling the curse
Still wondering how true the claim of the blind siblings is about the cause of their blindness, Saturday Sun visited their home at Ojota. Their father, Samuel Ikeji simply said he resigned to fate when he discovered that three of his children were blind at birth. 'In the history of my family and that of my wife, there is no trace of blindness. It is diabolical and since God allowed it, I know that He sees us through in giving them a good life.'

Mrs. Ikedi, a retired nurse lamented that she has visited all kinds of churches in a bid to break the curse that holds her children.

She recalled having heated argument with her landlady years back over the way her only child was treated. 'When my first child was about two, I had an issue with my landlady. In the course of exchange of words, I told her that she was in bondage and she converted the statement to mean that I was mocking her blind husband. She accused me of sneering at her husband because he was blind, and swore that I will have blind children. I did not abuse her husband, so I didn't understand her curse, the reason or why it became so effective. I later took ill after the encounter and was told by a white garment church leader that a certain woman was after me. I went back and begged for her forgiveness. Three months after I had my baby, Emeka, I discovered that he was blind. I took him to the hospital where it was confirmed but could not determine what was wrong. We had to pack out of her house when men of God confirmed that she was behind my problem. During my next pregnancy, I saw the woman, and when the baby arrived she was confirmed blind too. Even the one after Amaka came out blind.

I was frustrated, I took them to Kano and the doctors referred me to a blind school where I should train them.

I have tried so much getting solution but all failed. We have been at the mercy of Nigerians who have been assisting in taking care of them. I would do anything to help my children regain their sight.'