UK RETAIL SALES UP 0.3% IN NOVEMBER 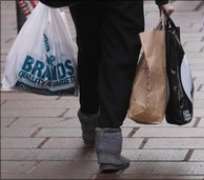 Sales rose in November for the second month in a row

But the previous month's sales were stronger than initially thought, with the Office for National Statistics (ONS) revising up October's figure from a rise of 0.5% to 0.7%.

The ONS said November's growth was driven by sales of toys, sporting goods, watches and jewellery.

Internet sales accounted for a record 10.5% of all sales, up from a 7.9% share this time last year.

Anecdotal evidence suggested that shoppers were browsing in stores before making purchases online, the ONS said.

Inflation worries
Sales were up by 1.1% from November last year, the ONS said in its latest statistical bulletin.

The ONS also estimated prices were some 2.3% higher in November than a year ago, which may further fuel fears of rising inflation.

Food price inflation has been accelerating and VAT is due to rise to 20% from 17.5% on 4 January.

A separate survey from the Bank of England showed that members of the public expect inflation of 3.9% over the next year, the highest expected rate since August 2008.

Inflation on the Consumer Prices Index (CPI) measure currently stands at 3.3% and has been at least a percentage point above the central bank's 2% target since the beginning of the year.