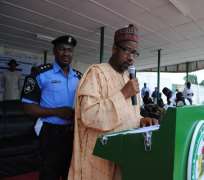 In January of this outgoing year, I tasked myself with the duty to ensure that I put up a piece in this column that will establish the symbiotic link between the civic and constitutional duty of every citizen to pay his/her tax and the duty imposed on the government to enforce the laws that promote respect for human rights, rule of law, good governance and the sustainable implementation of socio-economic infrastructure that meet global best practices and promote human development.

Early this month, while contemplating actively on the article I had promised myself to do since January as stated above, Daily Trust of December 6th 2010 and Leadership of December 9th 2010 ran beautiful stories on the Abuja Municipal Area Council’s decision to embark on an effective drive to encourage Abuja Municipal residents to pay up their taxes and revenue to the council as a way of enabling the authority to achieve speedy development in the municipality.

While the Daily Trust version as published on page 22 of Monday December 6th 2010 ran a captivating headline, which stated that “Tax evasion worries AMAC”, the leadership newspaper version of 9th December 2010 on page 40 ran the headline thus; “AMAC moves to raise revenue.” The substance of the stories as ran by both newspapers and others is the implicit linkage between payment of taxes by citizens and the duty imposed on government at every level to institutionalize good governance.

The stories as ran by the newspapers informed Nigerians thus;“The Hon. Councilor and Chairman Committee on Market and Revenue Generation Abuja Municipal Area Council (AMAC), Hon. Bala Iyah has appealed to the General public, Business operators and Commercial motorists within the Area council to cooperate with the council in the prompt payment of revenue to enable the speedy development of the council in all sectors.”

“Hon. Bala Iyah who is also the councilor representing Garki ward and the chairman Committee on market Revenue Generation in Abuja Municipal Area Council, called for effective and prompt payment of revenue to the council as the proceeds are often ploughed back to the society in the provision of Social Basic Amenities to both Rural and Satellite Communities.”

The newspapers also reported the Councilor as frowning at the Menace of Tax evasion by motorists and warned that the council will no longer fold its arms, because no meaningful development can take place without proper and accountable revenue generation regime.

Significantly, the Councilor, according to the reputable national newspapers stated thus; “Company and commercial motorists should endeavour to make prompt payments for vehicle stickers and emblems at the revenue office or the Abuja Trade and Investment Company as only those two are the legitimate channels for obtaining stickers/emblems.”

The councilor however alleged extortion by those he described as “Unscrupulous individuals” who hide on the cover of Mobile Advert consultants or National Coverage from unsuspecting motorists for stickers and emblems thus, short changing the council of its statutory revenue.”

“He also used the opportunity to caution motorists to be aware of double taxation and resist the temptation of patronizing criminals other than the council’s revenue unit and/or the officials of Abuja Municipal Trade and Investment Company for all payments relating to Local Government emblem/stickers.”

What then is the link between payment of taxes by citizens and the duty imposed on government officials at every level to ensure that laws to promote respect for human rights, institutionalization of a regime of good governance, the rule of law and vibrant democracy are strictly followed?

From the website appropriately called knowledgerush.com we are meant to understand that; “A tax is an involuntary fee - or, more precisely, "unrequited payment" - paid by individuals or businesses to a government (central or local). Taxes may be paid in cash or kind (although payments in kind may not always be allowed or classified as taxes in all systems). The means of taxation, and the uses to which the funds raised through taxation should be put, are a matter of hot dispute between political parties and economic theorists, so discussions of taxation are frequently tendentious”.

Governments collect taxes to among others: • to support the operation of that government itself; • to influence the macroeconomic performance of the economy (the government’s strategy for doing this is called its fiscal policy); and• to carry out the functions of the government, such as national defence, and providing government services The resource taken from the public through taxation is always somewhat greater than that than the amount which can be used by the government. The difference is called compliance cost, and includes for example the labour cost and other expenses incurred in complying with tax laws and rules, according to knowledgerush.com. The same website identified two types of taxes namely direct and indirect tax.

Conversely, from the website of www.econ.uconn.edu we were told in clear terms that; “One of the legitimate functions of government is the provision of public goods… Governments also provide what are called impure or quasi public goods.

What is clear from the above scenario is that if the citizens know that government officials will put their taxes to transparently credible use in the direction of provision of workable infrastructure, they would have no choice but to pay. In the case of Abuja municipal Area Council, it is a cheerful news that the man at the head of the revenue generation committee, councilor Bala Iyah has assured us that the area council will put our taxes to good use, it is the expectation of good spirited residents that all citizens especially members of the business community must pay their taxes. The civil society organizations and the anti-graft agencies must remain vigilant to ensure judicious use of these taxes from the people of Nigeria. Section 14[2] of the constitution provides that the “security and welfare of the people SHALL be the primary purpose of government”. The provision of workable infrastructure from the commensurate taxes paid by all Nigerians irrespective of their status and positions must be the hallmark of constitutional duties of all classes of political office holders. Nigerians should hold our elected political office holders accountable in the discharge of their onerous duties.