US RETAIL SALES RISE IN NOVEMBER 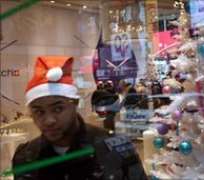 Department stores were among the big winners in November

US retail sales rose in November for the fifth consecutive month, driven by holiday season demand, official figures have suggested.

Sales grew by 0.8% last month compared with October, according to the US Commerce Department.

And when auto sales were stripped out, sales climbed by 1.2% – which was higher than many analysts had expected.

November also saw the the biggest jump in department store sales in two years, up by 2.8%.

“This increase, which was well above expectations, shows us that consumers are continuing to ramp up their spending and are happy to head back to stores in the midst of the holiday shopping season that is so critical for retailers,” said Jim Baird, chief investment strategist for Plante Moran Financial Advisors in Michigan.

“Compared with a year ago, the results are very encouraging.”

US shares moved slightly upwards in morning trading, with analysts citing the sales figures as having buoyed investors.

Fuel factor
Separately, wholesale prices, which measures price changes before they reach the consumer, rose by 0.8% in November.

Most of that rise stemmed from an increase in energy prices, especially a 4.7% rise in the cost of petrol.

So-called core inflation – which strips out energy and food costs – rose by 0.3%.

Meanwhile inventories of stock held by US businesses rose for a 10th consecutive month – up 0.7% in October after a revised 1.3% rise in September.

Gains in inventories are seen positively, as they reflect rising sales and the replenishing of stocks is viewed as a way of helping the economy grow.