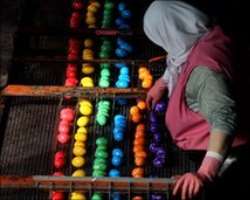 Industrial output may slow in the eurozone in the fourth quarter

Industrial production in the 16 countries that use the euro increased by 0.7% in October, less than expected.

The EU's statistics office Eurostat said that industrial production rose by 6.9% on an annual basis, down from peak levels seen earlier this year.

Economists had forecast a rise of 1.3% and an annual increase of 7.6%.

The latest data ties in with forecasts of slower fourth-quarter growth in the eurozone currency area as it faces up to a potential debt crisis.

'Peripheral weaknesses'
The recovery in the eurozone economy this year has been based largely on strong growth in the industrial sector following a rebound in global trade.

But recent data suggests the recovery is losing traction on the back of stalling global growth and continued eurozone debt problems.

Among eurozone nations the biggest increases in production were seen in Luxembourg, up 6.4% in October, and in crisis-hit Greece, up 3.6%.

The Irish Republic, which received a 85bn-euro EU bail-out earlier this month, saw a 4.8% fall in production, the biggest in the euro region.

“Today's report shows that eurozone industry as a whole started off the fourth quarter on a positive note, which is encouraging,” said Martin Van Vliet, an economist at ING.

“But the peripheral weaknesses coupled with the seemingly inevitable slowdown in world trade makes us cautiously optimistic about industry's prospects for the upcoming six to nine months.”

The ZEW economic expectations indicator, which surveys analysts and institutional investors, rose to 4.3 points from 1.8 points in its previous reading.

“In October, industrial production and incoming orders developed favourably in Germany and have thus been strengthening economic recovery,” a ZEW statement said.

Germany's central bank has forecast economic growth of 3.6% in 2010.

If this target is met it would be the best result since Germany's reunification in 1990.