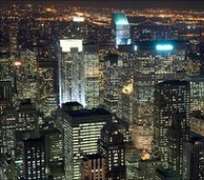 Chemical reactions would normally clean the air of fumes

Bright city lights exacerbate air pollution, according to a study by US scientists.

Their research indicates that the glare thrown up into the sky interferes with chemical reactions.

These reactions would normally help clean the air during the night of the fumes emitted by motor cars and factories during the day.

The study was presented at the American Geophysical Union meeting in San Francisco.

All those people going about their business in a city put a complex cocktail of chemicals into the air.

From the tailpipes of cars to the chimneys of factories, it makes for a heady mix of molecules that nature then has to try to clean up.

It uses a special form of nitrogen oxide, called the nitrate radical, to break down chemicals that would otherwise go on to form the smog and ozone that can make city air such an irritant on the chest; and it does this work in the hours of darkness.

But new measurements taken from aircraft over Los Angeles indicate the energy from all the night-time light thrown out by this huge urban centre is actually destroying the radical, leaving many more chemical ingredients around the next morning to fuel that day's pollution.

Cities need their lights for safety, but researcher Harald Stark from the US National Oceanic and Atmospheric Administration (Noaa) says making sure lights point downwards could help matters.

“It's more important up in the air than it is directly on the ground so if you manage to keep the light pointing downward and not reflected back up into sky, into the higher parts of the air, then you would certainly have a much smaller effect of this,” said Dr Stark.

Red lighting doesn't interfere in quite the same way as the standard white and yellow lights used for illumination, but Dr Stark says he doubts cities would want red lights everywhere.