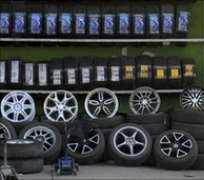 China has accused the US of protectionism
China says it plans to appeal against a World Trade Organization (WTO) ruling that the US was entitled to impose extra duties on Chinese tyre imports.

Beijing said it “regretted the ruling” and was “deeply concerned” about the potential impact of the decision.

Last year, President Obama imposed punitive duties of up to 35% on imports of Chinese-made tyres.

China called the move “protectionist” and had argued that the measures were not justified.

But on Monday the WTO panel said in its ruling that the US “did not fail to comply with its obligations”.

The Chinese commerce ministry said that it would “carefully research the dispute settlement panel's report and appeal at an appropriate time to protect the Chinese industries' legal rights and interests”.

Redundancy claim
The US had hailed the WTO finding as “a major victory for the United States and particularly for American workers and businesses”.

When it introduced the duties, the US government argued that Chinese tyre imports had tripled in volume over four years.

It said this reduced US tyre production by more than a quarter over the same period, leading to 14% of workers in the industry losing their jobs.

China countered that the US tariffs would cost its tyre industry $1bn (£630m), and cause 100,000 Chinese redundancies.