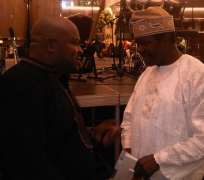 Akin Tofowomo led Shuga band in recent times has become the most talked about band in Nigeria. Their presence at parties is not just for the entertainment value that the band brings, it is also the class brand the band brings to an event. Shuga Band has become a statement

A roll call of some of the high profile personalities they have performed for is the likes of Mike Adenuga, presidents, Governors, blue chip companies, media houses, in recent times Shagaya's son's wedding amongst others.

Speaking on why Shuga Band has become the most talked about band; celebrities have this to say.

Gbenga Adeyinka, a foremost comedian said 'the band versatility is what stands it out. Akin Shuga as Akin Tofowomo is fondly called and Shuga Band is another name for versatility, style and true professionalism. His band is ever punctual and they'll keep the party rocking. I've done quite a number of gigs with him and his band and every time, I see freshness in the band. I am proud that this band is Nigerian' he concluded'.

Elsie Oluku, CEO of Shakara and Yanga clothing said, 'the band is special because there are albums to its credit'.

Moyo Aderemi, a public relation expert said 'timing and singing ability is what the band has going for them. They actually sing very well, they happen to come at the right time when wedding and corporate events were in vogue and they have remained number one ever since'.

Jerome Onipede speaking on shuga said 'I think it is their captivating style, Akinloye's leadership and the way the band adds a uniqueness to well known songs. Last but not the least; Shuga band appeals to all generations and they can perform any genre of song.

Mo Abudu said, 'I think what makes it unique is the fact that the band appeals to people of all ages. The oldies flavour is particularly wonderful'.

Dr Chidi Onwudiegwu said ' Shuga Band work to hone their craft, its not just business for them. All the details and elements are in place; just compare their diction and pronunciation to that of others in the same metier'.

Tolagbe Solye said 'Akin Tofowomo aka SHUGA is unique and his personality has rubbed on Shuga Band. Akin no doubt has a passion for music and God has granted and enabled him with a talent, making his type of music cut across all ages and times. Akin is the toast of all parties and if you are lucky to have locked him in early enough you are set to have a hot gig for a party.