Nigeria Is Broke â€“ Atiku; You Are An Alarmist - GEJ 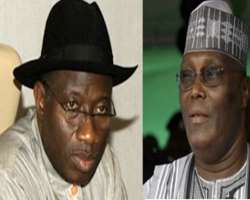 But the Goodluck Jonathan Campaign Organisation in a swift reaction to the statement has described ‘Alhaji Atiku Abubakar as an alarmist, saying the Turaki Adamawa is ‘ignorant in basic economic matters.’ According to a statement by the Atiku Abubakar Campaign Organisation, the formerVice President had severally alerted on the parlous state of the nation’s economy. Similarly, Managing Director of the World Bank, Dr. Ngozi Okonjo-Iweala and the former Governor of Central Bank of Nigeria, Prof Chukwuma Soludo and the Brettonwood institutions have also urged urgent interventions to stem the slide of the economy.

But rather than take heed of the alerts, the Jonathan administration has continued to play the ostrich and live in denial of the true state of the Nigerian economy.

The PDP presidential aspirant warned yesterday that unless the uncontrolled spending and mismanagement of the economy by the Jonathan administration is checked, the nation risks going broke sooner than later.

He noted that the Minister of Finance, Dr. Segun Aganga and Governor of CBN, Lamido Sanusi Lamido have acknowledged that that indeed all is not well with the nation’s economy.

He said that with inflation currently at 14% in Nigeria compared to the BRIC countries’ (Brazil, Russia, India, and China) 7-8% and sub-Saharan Africa’s around 7%, Nigeria may not attain the 2020 target of being one of the leading 20 economies.

Atiku noted that the current situation is also being exacerbated by the rapid depletion of the external reserves with not much to show for it in terms of infrastructure and economic development.

He dismissed the claim of Aganga that Nigeria is currently one of the top 10 economies of the world as reminiscent of George Orwell’s Animal Farm in which presumed economic growth is only visible from pronouncements of government officials.

He said that in the first 8 months of this year alone, the foreign reserves have gone down by $8 billion with its attendant impact on rising inflation.

He noted that the CBN’s intervention in raising the MRR (minimum rediscount rate) by 25 basis points has not helped the situation adding that since rates were raised, another $2.7 billion have gone from the reserves.

The PDP presidential aspirant said that even most worrisome is the depletion of the Excess Crude Account from $22 billion to $470 million with no corresponding projects associated with the spending. He regretted that most of the expenditure has gone into recurrent spending.

According to him, the fact that the Jonathan administration is relapsing into the habit of foreign borrowing is a clear indication that something is wrong with the way the economy is being run.

He said as desirable as borrowing is to the development of the economy, the funds so borrowed must be targeted at critical sectors, else the nation would be returning to a regime of debt overhang.

‘You Are An Alarmist’ Says Goodluck Jonathan Campaign.

The Goodluck/Sambo Presidential Campaign Organisation has however described Alhaji Atiku Abubakar again as ‘an alarmist’, saying he is ‘ignorant in basic economic matters.’

In a statement issued today by its Director of Media and Publicity, Mr. Abu, the campaign said Alhaji Atiku’s latest statement on the economy is full of his usual alarm designed to show him as something of economic expert. But he continues to whip up random statements about certain economic indicators and to offer them as received wisdom.

Abu said the last time Alhaji Atiku spoke about the Nigerian economy, he was roundly educated by officials of the Federal Government. However, given his latest statement, it would appear that he is incapable of seeing anything good in management of the national economy merely because he wants to score cheap political point. “Atiku claims that Nigeria is broke. To buttress his claim, he cited figures that were merely hanging in the air (Foreign reserves have gone down by $8.billion, the Excess Crude Account has gone from $22 billion to $470 million), misquoted the Minister of Finance (who said that Nigeria’s growth rate is one of the top 10 in the world rather than one of the top 10 economies of the world) and make unsubstantiated allegations about the correlations between monies and projects.”

Pray, what research did Atiku undertake to show that monies have been taken from the Reserves and Excess Crude Account with nothing to show for it? Is he saying that all the 36 State Governors and 774 Local Government Chairmen who received their share of the Excess Crude Account have done absolutely nothing with it? If he has been living in this country, would he not have been aware of the cooperative resolution of the Federal and State Governments to deploy substantial proportion of the Excess Crude Account into resolving Nigeria’s power problem? Can anyone claim not to know about the several power projects going on in the country today?

Abu said that Atiku has nothing to back his claim of financial recklessness against the Government of President Jonathan, because It is clear that the management of the economy is not Atiku’s forte, adding that he should, therefore, not allow sheer desperation to push him into making reckless and unfunded statements about people whose knowledge of the economy, pedigree and economic reputation are more superior than his.

He advised that time has come for the PDP to call Atiku to order, apart from being reminded that he is no longer the Presidential candidate of an opposition party but an aspirant on the platform of the PDP.