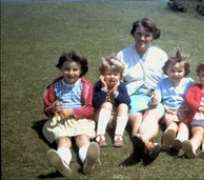 The birth of the world's first IVF baby, Louise Brown, in July 1978 was a huge international event – and also a very special moment for the Edwards family.

They were away from their Cambridge home at a holiday cottage in the Yorkshire Dales, to try to escape the press attention.

Professor Robert Edwards is the physiologist who developed the IVF technique – along with his late colleague, Dr Patrick Steptoe. They established the world's first IVF clinic, Bourn Hall in Cambridgeshire.

Professor Edwards' second daughter Dr Jenny Joy and her four sisters are full of pride today. They have travelled to Sweden to celebrate their father being awarded the Nobel Prize for Medicine on Friday.

Jenny, now 50, was 18 when Louise Brown was born.
'Waiting to pounce'
She remembers: “That moment was the pinnacle – but there'd been so many years of research leading to it.

“I just remember Dad going to the hospital in Oldham quite regularly – and then coming back elated.

“The press were camped out there waiting for the birth. There were huge celebrations.

“Having a healthy baby was the key thing – the critics were waiting to pounce.

“There had been pregnancies before and they hadn't gone full term. When the baby was born safely, everyone was ecstatic. There had been so many hurdles on the way.

“In the early days the press reports were often sensational. But Dad was totally dedicated to his cause and nothing was going to put him off.

“It was wonderful for Dad to have a big family of five girls. It made him appreciate what others were missing.

“He was well aware of the anguish of infertility, and he thought that having life and children was one of the most important things in the world.”

Professor Edwards, 85, is too frail to travel to Sweden to collect the award – so his wife, Ruth Fowler, is collecting it on his behalf.

They met when she was studying for her PhD in Edinburgh, and she worked alongside him, helping produce scientific papers as well as looking after the family.

IVF is now a well-established technique, but in those days it was controversial.

Alien
The infertile women who were seeking treatment often had to keep their efforts secret from family and friends.

Jenny said: “This idea of a test-tube baby was alien to most people's thoughts. People imagined them actually growing in test tubes.

“We grew up with the press on the phone, trying to talk to Dad.

“Now everyone knows someone who's had IVF. And for us, the programme has been part of our lives.”

Jenny now works in butterfly conservation – but she was an auxiliary nurse at Bourn Hall when it opened.

She's keen to pay tribute to her father's determination, and his other qualities and interests.

She said: “Whatever the setbacks in his work on IVF, it never put him off.

“He's always been an ideas man – full of energy and incredibly driven.

“He loves the Yorkshire Dales and we always used to go there for family holidays. He'd be out stone walling and sheep dipping, or out looking after trees on his old yellow tractor.

“He was very involved in Labour politics – and at one point considered standing as MP for Cambridge. We're glad he chose physiology!

“When we got the phone call about the Nobel Prize, we really couldn't believe it. Everyone cried.

“It's wonderful he's been recognised in this way. And it's very important to Dad.”