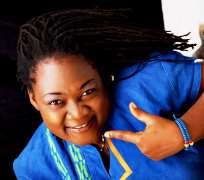 Damilola Adekoya, popularly known as Princess, is one artiste that needs little or no introduction in the Nigerian comedy industry. The humorous comedian and actress has kept her head high over the years in a trade regarded by many as “men's domain.” She started as an actress at the tender age of six. Her first experience on stage came when she starred in drama, “Half-Human, Half-Animal.” The turning point came in 2001 when she met actor Kayode Peter, and their meeting set the stage for a career that would later see her make a detour into comedy. From that point, she has featured in other plays like Armageddon, Black Sheep, Mama and Private Lies, among others. She has also featured in many television programmes, including Flat Mates and Super Story. Her foray into comedy began when she met the producer of the popular television series, Papa Ajasco, Wale Adenuga. The prolific producer saw the comical side in her make-up and advised her to take to comedy. In this exclusive interview with nfc, the humorous comedienne spoke about her career, the problems affecting the comedy industry, her relationship with her former lover and how she was jilted.
Excerpts:

After your last relationship broke down, you have not been linked to any guy. Why is this so?

But it was speculated then that you travelled out to shop for your wedding?

Sheee! I dey travel to go hustle for show. No bi e make me dey travel. I did not travel out to buy clothes or whatever. Just to do shows and make sure people are coming for these shows because I wan buy big moto, big house and I have to work for my money. So now, how does my traveling out every month mean that I am getting married? It's not fair.

But you are in a relationship that is altar-bound?

I am not in any relationship.

Are the guys not coming?

I will not answer you that one oh! You are just attacking me for nothing. Na interview you come for abi, na fight you con fight me? I am not in a relationship.

But you were in a relationship before?

I was jilted and I am not the only one. I know a lot of people have been jilted before (chuckles). Some people are here laughing (referring to two of her friends in the house listening to the interview). If you have been jilted before, you will understand what I am saying. I was jilted. It's not a sin to be jilted. For some, it takes a week to recover after being jilted. For others, it takes two years, even three years.

So which category do you fall into, two or three years?

Maybe I fall in that category of people that when they are jilted, it takes them a long time before they can get back on their feet. So, you people should just be praying for me to get back on my feet. God should give me the strength so that when I meet another person who likes me, who wants to date me or marry me or whatever, I will be able to discuss it. When you are jilted, and another person comes another day and says: “Oh! I love you. I want to marry you…,” you will not know who to believe again.

Why is it taking you so long to get over a broken relationship, is it that you were deeply in love?

If you have got over it, why are you not in another relationship by now?

My brother, go and buy the relationship and bring it (general laughter).

But the guys are still coming?

(Laughs) Why are you people so much interested in my own marriage?

Because we want the best for you

Hey! God, I don die. So are you telling me it's my fans that sent you to ask me these questions?

Then, I'm really moved by this information because I never knew they are more concerned about me. I believe some of them just come to my shows and listen to my jokes and go to their homes. Some of them talk good behind me, some of them talk bad behind me. God is watching them. I have seen one or two persons coming to meet me in my church: “Princess, we are praying for you. God will give you your own husband. We know you were jilted.” I don't know that Nigerians pray for me, too. But I don't know why you are asking me all these now, maybe so that you can go and gossip about me (general laughter).

What led to the break-up, was it your fault?

(Cuts-in) Who told you that eh?

Men most times need the attention of their women…

(Cuts-in) I don't know. If that is why you are here, then you have to schedule an appointment to go and meet the guy and ask him these questions (laughs) because even me, I asked them. I said him, “What did I do?” He said, I didn't do anything, that he has already impregnated someone else. Look, people can disappoint you any time. My prayer is that for those that are married, may God make their marriages last. But for those that are not married, may God not let them make a wrong choice. The most importance thing is, make the right choice. I made the wrong choice. I believe the person I was dating loved me until I was proved wrong. We can all make mistake. My prayer for Nigerians is that as they wish me well, God should also make sure that their children don't make the mistake of a wrong choice. I also advise everybody to be careful because if you make the wrong choice and marry another person's wife, you are in problem. She will frustrate you. She will sleep with your neighbours and whatever.

Amen! But you must have seen the signal before it broke up?

So, how do you feel at that moment?

Is he in the industry?

He is not in the industry.

Aside impregnating another girl, could it be that he was uncomfortable with your fame and popularity?

My brother, you don't know the person! Maybe you should go to his house and ask him.

Let's assume it's because of that sad experience that you have chosen not to go into any relationship for now?

How soon do you hope you go into another relationship?

Are there times that you miss the touch of a man?

Ah! I am a human being. Maybe if I feel it that way, I will go and swim or do something to get over it.

That one pass swimming pool o!

It's like you have a swimming pool in this compound?

No. But it's not far away from here.

So when you get into the swimming pool, what do you do, romance the water?

Who you wan make I romance? You? Eh! Tell me. Anyway, na you talk am. I hope you no bi comedian oh? E bi like say you go go do comedy.

What is your perception of the average Nigerian man when it comes to relationships?

It's not a matter of Nigerian men. Nigeria o, America o, they are all the same. Men and women, anybody can disappoint you. If I say only men, then I am not being sincere. The truth is that some people are not trustworthy and if you trust them, you are finished!

What if the guy makes a comeback?

Forget that. Talk about something else

Ah! I say it will not happen. The person is married with kid now. Abi you get another thing wey you dey find there?

What if he decides to take you as a second wife since he still loves you?

If na your sister, you go gree make e marry am?

Comedians are most times seen as unserious people…

(Cuts-in) Who are the people who are seeing them as unserious?

We are not unserious people off-stage. We are like prophets of God and I believe Nigerians will continue to pray for us, too.