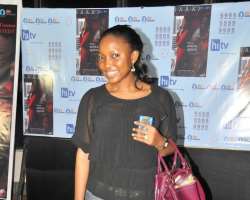 It was a night to remember on the 5th of December 2010 as award winning movie 'Between Kings and Queen' was premiered at the Silverbird Galleria in pomp and style.

Starting with a red carpet that lasted for about an hour and half, journalists and photographers had a field day interviewing and taking pictures of celebrities like Jim Iyke; AMBO box office winner, Mcwizu and others that were present that night.

The movie screening was soon over with the audience commenting on the movie. A journalist remarked that the movie is a good one but was surprised that star actor Jim Iyke did not play a lead role.

Happy at the success of premiere, Mrs. Joy Dickson the writer and director of Between Queens and Kings, said “The film explores varied themes such as identity, culture, and moral codes, as well as race relations between African-Americans and Africans. It was guided by Director of Photography Michael Morlan, a 2008 Oscar nominee, and features breakthrough performances by Dajuan Johnson, Nakia Burrise, and Nigerian superstar Jim Iyke”.

Between Kings and Queens' features Nollywood and Hollywood stars like Jim Iyke, Nakia Burisse, Dajuan Johnson and Trenton Rostedt, and tells the story of Kalu, a young prince from Africa who seeks to escape his royal duties by fleeing to America. His experience in the land of liberty quickly unravels as he finds himself working for a local deli and sleeping on his cousin, Nanna's couch. Kalu soon crosses paths with the friend of a notorious drug lord in town, his journey takes him on a dangerous path. Enter Susan, a beautiful African-American woman who connects with Kalu as he becomes the target of the drug cartel and a pair of corrupt cops. On the run from both sides of the law, Kalu uses his creativity and stands by his ideals to overcome the challenges he faces in the land of liberty.

Speaking on his experience while working on set of Between Kings and Queens, popular Nollywood actor said, “I saw it as a cultural exchange of some sorts. I was basically the only African in the movie but you know the way thespians are , irregardless of the colour .We think alike, we are one minded people ,we are uniformed in our approach to things so in no time it was easy for me to blend in and work together to make things happen. The truth is that the key ingredients when shooting a movie is the talent and relentless effort of the director. It was easy to work and hang around with some really cool people.