STAGECOACH PROFITS UP AS TRAIN AND BUS REVENUES RISE 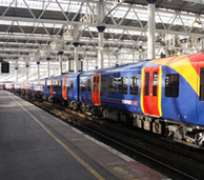 Stagecoach is one of the UK's largest transport firms

Stagecoach has seen its half-year profits rise 43%, driven by higher passenger numbers on both its rail and bus operations, and increased margins.

Revenues at the company increased by 5% to £1.1bn.

The company, one of the UK's largest travel firms, also has significant operations in the US and Canada.

Stagecoach chief executive Brian Souter said: “These are a strong set of results and we are encouraged by the increased demand for our services in the UK and North America.”

Profits at the firm's UK regional bus operations rose 16.5%, while those at its UK rail businesses added 4.4%.

Across its North American companies, profits were up 9.7%.

Stagecoach said it had enjoyed a good start to the second half of its financial year, and that the impact of the recent snow across the UK on its revenues would only be “relatively small”.