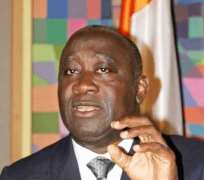 President, Laurent Gbagbo
The Authority of Heads of State and Government of ECOWAS member-states on Tuesday recognised Ivoirien opposition candidate, Mr. Dramane Allasane Ouattara, as the winner of the disputed presidential election in the West African country.

They also called on incumbent President, Mr. Laurent Gbagbo, to abide by the results and step down immediately.

To drive home its displeasure at the current situation in the West African country, the authority also suspended Cote d'Ivoire from the activities of the ECOWAS Commission, pending the resolution of the impasse. The sub-regional leaders made the decision after reviewing the political and security situation arising from the elections at an extraordinary session, which held at the Presidential Wing of the Nnamdi Azikiwe International Airport, Abuja.

Part of a communiquÃ© adopted after the meeting, which lasted over six hours, reads, 'After a thorough review of the situation, the Authority expressed deep concern over the threats posed to the success of the peace process leading to a lasting solution to the Ivorian crisis.

'Reaffirming their commitment to the relevant provisions and principles of the ECOWAS Protocol on Democracy and Good Governance, the Heads of State and Government condemned in strong terms, the attempt to go against the will of the Ivorian people as freely expressed on November 28, 2010.

'In order to protect the legitimacy of the electoral process, the Summit endorsed the results declared by the Independent Electoral Commission and certified by the Special Representative of the Secretary of General of the United Nations in Cote d'Ivoire in accordance with Resolution 1765 of the United Nations Security Council, dated 16 July 2007.

'In this regard, the Heads of State and Government recognised Mr. Allasane Dramane Ouattara as President-elect of Cote d'Ivoire, and subsequently, representative of the freely expressed voice of the Ivoirien people. The Summit called on Mr. Laurent Gbagbo to abide by the results of the second round of presidential elections as certified by the UNOCI, and to yield power without delay, in the best interest of the Ivorian people.

'The summit decided to apply the provisions of Article 45 of the ECOWAS Protocol on Democracy and Good Governance relating to the imposition of sanctions on Cote d'Ivoire, including the suspension from all ECOWAS decision-making bodies until further notice.'

The communiquÃ© was signed by the Heads of State and Government at the meeting, including President Goodluck Jonathan of Nigeria; Blaise Compaore of Burkina Faso; John Atta-Mills of Ghana; Ellen Johnson-Sirleaf of Liberia; Amani Toure of Mali; Abdoulaye Wade of Senegal; and Faure Gnassingbe of Togo.

Addressing journalists after the meeting, Jonathan, who is the ECOWAS Chairman, said the sub-regional body would also support any further sanctions that would be placed on Cote d'Ivoire by the UN and other stakeholders.

Jonathan stressed that ECOWAS would not support the establishment of a unity government in Cote d'Ivoire, noting that only the results of the second round of the presidential poll could be used to form a democratic government.